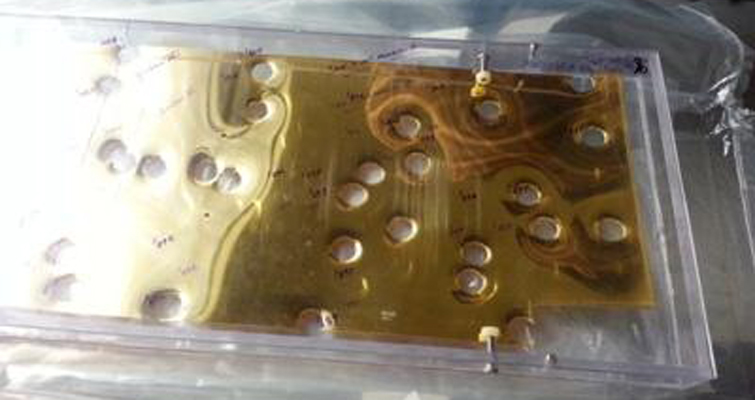 Six gold plates flown aboard an unnamed NASA space mission are being auctioned by the General Services Administration, the federal agency that sells federal property.

Images courtesy of the GSA.

Want six pure gold plates that flew in space aboard an unnamed mission? You have only a few days to get your bids in at the General Services Administration, where the federal agency that handles sales of public property is auctioning the gold plates.

In a sale closing Jan. 22, GSA is offering what it dryly describes as "One lot consisting six 24KT gold plates weighing 6,015.5 grams. These plates were reportedly flown in space for 69 months."

The GSA lot description does not identify which space mission the gold flew aboard, but space enthusiasts have probably identified the mission. An article at the website CollectSpace theorizes: "The '69 months' ... may be a clue as to the plates' spaceflight history. That specific length of time matches exactly how long the Long Duration Exposure Facility (LDEF) orbited the Earth. The school-bus-sized cylindrical satellite circled the planet from 1984 to 1990, collecting data on the long-term effects of space exposure on different types of materials."

Space-flown items enjoy immense popularity in the collecting community, whether an object be a piece of a lunar astronaut's space suit coated in moon dust or a Robbins medallion carried in the personal baggage of Buzz Aldrin. Numerous space-flown numismatic items have been auctioned over the years, from the first Mercury missions of the early 1960s to the Apollo missions a few years later to the missions of the space shuttle era of the late 20th and early 21st centuries.

Most sales of these numismatically themed objects, however, have been conducted by private firms, like Heritage Auctions' upcoming May 22, 2015, sale. GSA sells a lot of government property, from buildings to equipment, but it may not necessarily be known for selling numismatic or bullion objects that have flown in space.

As for the gold plates the GSA is auctioning on behalf of NASA, bids must be entered by 5:15 p.m. Central Time on Jan. 22. Better be ready to pony up a six-figure payment for the gold bars, too. The current bid is $151,101.