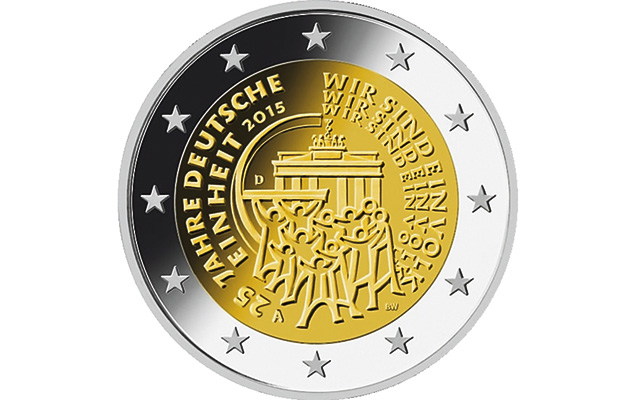 On Oct. 3, 1990, a unification treaty that had been ratified by the Bundestag and the People’s Chamber in September went into effect. The German Democratic Republic joined the Federal Republic of Germany and united after decades of division.

Germany’s first circulating commemorative €2 coin in 2015 marks the momentous milestone. The coin, which has a total mintage of 30 million pieces, will be issued by each of Germany’s five mints. The number of coins issued per mint has not been announced.

Engraver Bernd Wendhut’s design shows people standing in front of the Brandenburg Gate, symbol of German unity. embodying a new beginning and the advance toward a better future, according to the European Commission.

An inscription Wir sind ein Volk (meaning “we are one people”), fills the design, a collective expression of will by German citizens that was used for protest signs and became a rallying cry for reunification.

Each eurozone nation may issue up to two circulating commemorative €2 coins annually, with designs of their choosing. Any joint program, like the 2009 series marking the 10th anniversary of the euro currency, does not count toward that limit.

Not every nation issues circulating commemorative €2 coin in 2015 coins, and some may chose to only issue one special design annually.