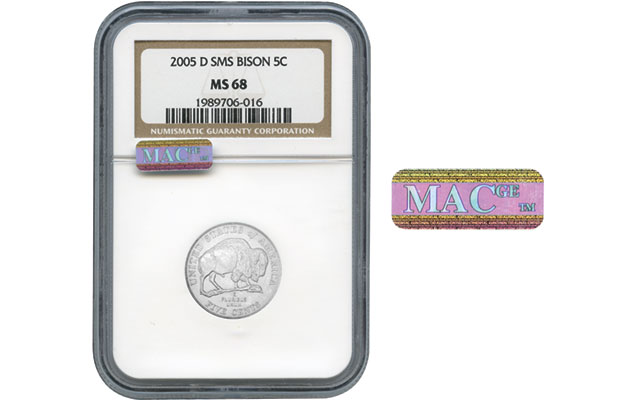 MACge LLC will sticker coins previously certified by NGC, as shown, or PCGS that exhibit premium quality based on the certified grade or that exhibit characteristics that add value, in the firm’s estimation.

A new Florida firm has begun identifying what it calls “Grade Enhancements” on certified and encapsulated modern coins, by adding a sticker to the slabs of coins meeting company criteria.

MACge LLC, Monroe, Fla., offers a two-pronged system for designating specific elements of coins that exhibit value-added characteristics. Each coin that meets the firm’s criteria will be have the holder stickered with a copyrighted hologram.

MACge will accept for MAC stickering all U.S. and foreign Mint State coins from 1960 to the present, though only coins already graded and encapsulated by Professional Coin Grading Service or Numismatic Guaranty Corp.

The “MAC” component of the company name is an acronym for “Modern Approved Coin,” and “ge” stands for “Grade Enhancement.”

Any modern coin that MACge believes to be undergraded by one of the two top grading services — a coin the firm considers “premium quality,” or “PQ” — is considered to be “MACABLE.”

According to the firm, a PCGS- or NGC-certified coin that has exceptional characteristics for its grade, say Mint State 67, would be designed MS-67 MAC (PQ).

The GE or Grade Enhancements component of the company’s designation “refers to valuing a coin taking into consideration features that may not have been considered previously,” according to the firm.

“For example, in the 1953 mintage, a tiny fraction of the Jefferson nickels have full steps, due to poor die quality that year,” according to the MACge website. Also according to the firm’s website: “A 1953-S Full Step Jefferson nickel in MS-66 sells for $35,000 due to its rarity. The vast majority of the 1953-S nickels have no steps, and sell for around $150. However, there are a few 1953-S nickels that have 4 steps, and those should be designated as such and valued accordingly. We will designate that coin with a MACge sticker ‘4Steps/4FS’, and that coin will increase in value beyond the $150 for the 1953-S nickel with no steps.”

While MACge officials note that full step Jefferson 5-cent coins, full bands Winged Liberty Head and Roosevelt dimes, full head Standing Liberty quarter dollars and full bell lines Franklin half dollars, among other designations, have been accepted elements of numismatic nomenclature in determining value for decades, they also note that other elements have been overlooked.

The company identifies 17 copyrighted Grade Enhancement categories. Grade Enhancements can be applied to all traditional coins, such as Standing Liberty quarter dollars and Walking Liberty half dollars, and some modern coins, according to MACge officials:

Separate fee structures will be assessed depending on whether the submissions are from the public or dealers. The fees rise depending on how quickly a submitter wants the submitted coins examined and returned.

The basic turnaround time is two weeks, with a minimum submission of five coins.

The firm displays information on membership levels for submitting coins.

MACge also will be posting a census of stickered coins, as well as a MAC Value Guide and GE Value Guide, at its website.