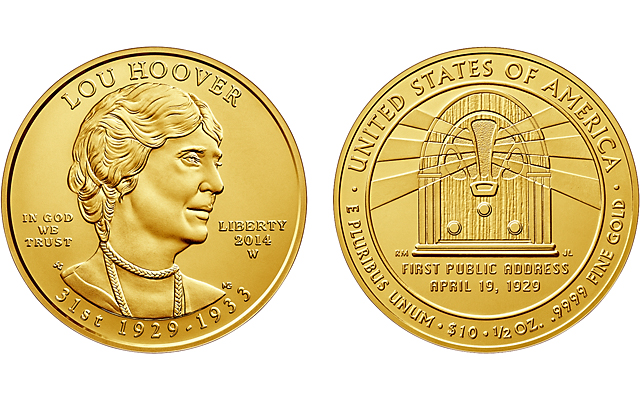 Sales by the United States Mint of the Uncirculated 2014-W Lou Hoover First Spouse gold $10 coin are currently the lowest for any of the 34 coins already issued in the half-ounce, .9999 fine gold coin series.

As of Nov. 16, the U.S. Mint reported sales of 1,136 of the Uncirculated Hoover First Spouse coins.

Sales for the Proof version of the Hoover coin were reported at 1,675 through Nov. 16.

The program will continue through 2016, and is currently scheduled to conclude with the release of the Proof and Uncirculated 2016-W Betty Ford First Spouse gold $10 coins.

The 2013 and 2014 coins each have maximum combined authorization mintages in Proof and Uncirculated versions of 10,000 coins across both ordering options.

The price of the 2013 and 2014 First Spouse coins is based on the U.S. Mint’s pricing grid for coins containing precious metals. The price is subject to change weekly.

For more information on the First Spouse coins, visit the U.S. Mint website.