First four in line to buy gold Kennedy half dollars 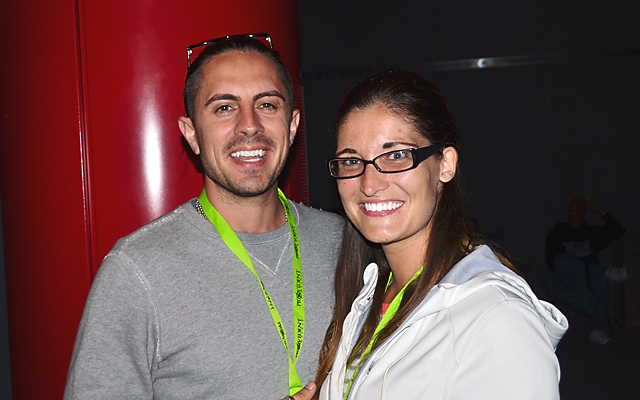 Nick Yadgarov and Callie Hohlfeld of Los Angeles were the first two people in line outside the convention center starting at 11 pm Monday night, August 4, to be the first to purchase the gold Kennedy half dollars at the ANA World's Fair of Money. Photo by Donn Pearlman.

Four people from Los Angeles are the first in line to buy the first gold Proof Kennedy half dollars at the American Numismatic Association World's Fair of Money in Rosemont, Ill. They have already accepted an offer of $20,000, and four more gold half dollars in trade, tendered by two coin dealers, for the coins they plan to buy.

Nick Yadgarov is the collector member of the four from Los Angeles. Second in line is his girlfriend, Callie Hohlfeld, followed by his brother Dan Yadgarov and another family member, Rina Maya.

According to Nick Yadgarov, the four are already credentialed, having preregistered for the ANA convention. That's a requirement for everyone hoping to gain admittance to the convention in Rosemont, whether or not they want to buy one of the gold coins. That requirement will be a problem for many of the 700 and more people standing in line by 7 a.m. Central Time; Coin World spoke with some those waiting and learned that many are not collectors. Many of them were unaware that they have to register at the ANA registration booth or be preregistered before they can get a ticket for the gold coins to be offered by the Mint.

The Mint plans to hand out tickets to the first 500 persons in line who are preregistered to attend the convention. Each ticket enables the holder to buy one of the gold coins at a price of $1,240. And many of those in line hope to sell their coins for a profit.

Nick Yadgarov was telling Coin World that as a collector, he had hoped to retain one of the coins his group planned to buy, unless something happened. Shortly after, dealers Kevin Lipton of Kevin Lipton Rare Coin, Beverly Hills, Calif., and David Hendrickson of SilverTowne, Winchester, Ind., made them an offer they couldn't turn down: $20,000 for the four coins, plus an additional gold half dollar for each of the four individuals that they can then keep or sell.

As of about 7:30 a.m. Central Time, Lipton and Hendrickson had not decided which of the grading services offering special labels for the first four coins purchased at the ANA show they would use in having the coins certified. The two dealers do plan to offer the coins for sale on the television shopping program Coin Vault.

Coin World will continue to update its coverage of sales of the gold Kennedy half dollar throughout the day.