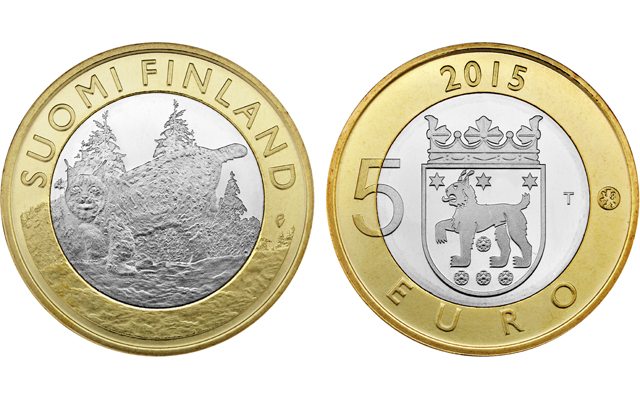 The Mint of Finland concludes its Animals of the Provinces €5 coin series with a coin honoring Tavastia and the lynx.

The Mint of Finland’s Animals of the Provinces series, released in 2014 and 2015, will conclude on June 8 with the launch of the collector coin paying tribute to the emblematic lynx of Tavastia.

The obverse of the €5 collector coin was designed by Erkki Vainio and depicts the lynx, while the reverse (by Nora Tapper) bears the historical coat of arms of Tavastia.

The Mint of Finland series honors the emblematic animals of Finland’s historical provinces.

The €5 coin released in June will be Finland's third coin dedicated to the province of Tavastia, including coins from other series.

The first provincial coin of Tavastia, released in 2011, paid tribute to the province’s ancient hunting traditions.

The second coin was launched as part of the Buildings of the Provinces series in 2013 and honored the Church of St. Lawrence — a gathering place of Tavastians for more than a millennium.

In total, nine collector coins have been released in the Animals of the Provinces series in 2014 and 2015: the Black-Throated Loon of Savonia, Cuckoo of Karelia, White-Tailed Eagle of Åland, Fox of Finland Proper, Beaver of Satakunta, Reindeer of Lapland, Hedgehog of Uusimaa, Stoat of Ostrobothnia and this Lynx of Tavastia.

A limit of 35,000 Uncirculated examples of the 2015 Tavastia coin are available, but the Mint of Finland hasn’t provided mintage limits for several products that include the Uncirculated coin.

The Mint of Finland offers a 10-coin pack in a coin purse for face value, €50.

In addition, a collection purse including one Uncirculated example of each Animals of the Provinces coin will be released at the same time as the Lynx coin of Tavastia. This nine-coin pack will be sold for the face value, €45.

An additional 500 Uncirculated coins are available with a numbered certificates of authenticity for €10 each.

A limit of 10,000 Proof versions are available, presented in plastic capsule and a case with details about the coin, for €22 each.

The coins may be ordered through the Mint of Finland online shop beginning May 25, but delivery of the coins will not begin until the June 8 release date.

Want to read about more coins in this series? Coin World has you covered!
Finland’s new Provincial Animals coin gets right to the point