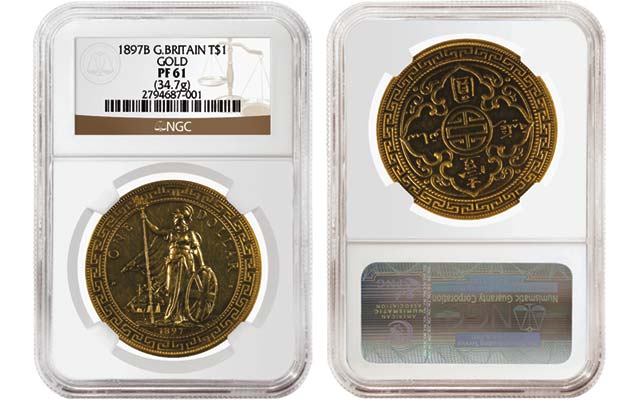 A rare gold Trade dollar from Britain, struck in 1897 at the Bombay Mint, highlights A.H. Baldwin & Sons Ltd.'s April 2 auction. It is one of fewer than 10 pieces known of that date.

Numismatic Guaranty Corporation has certified an extremely rare Great Britain 1897-B Gold Trade Dollar. Graded NGC Proof-61, it is one of only a handful of examples believed to exist and is the only specimen certified by NGC.

“Baldwin’s chose to use NGC because of their international reputation for professionalism,” says Seth Freeman, Director, A. H. Baldwin & Sons Ltd. “We were extremely pleased with the quality of the service we received and the speed of turnaround; this is especially important for our auction business where deadlines need to be adhered to. We will certainly be using NGC again.”

British Trade Dollars were issued in silver from 1895 to 1935 for trade in East Asia. The obverse depicts an allegorical figure, Britannia, while the reverse features the denomination—“One Dollar”—in Chinese and Malay along with an ornamental design.

Extremely limited numbers of gold Trade Dollars dated 1895 through 1902 were struck by the Bombay Mint. Although no precise mintage figures exist for these gold presentation pieces, it is thought that fewer than 10 examples of each date have survived.

“This is the first 1897-dated British Gold Trade Dollar that we have seen so it was very exciting to have the opportunity to grade it,” says Jay Turner, NGC Finalizer. “It is an impressive example of an interesting and elusive issue.”

For more information on this 1897-B British Gold Trade dollar, NGC Proof-61, and to bid, visit the Baldwin’s website.