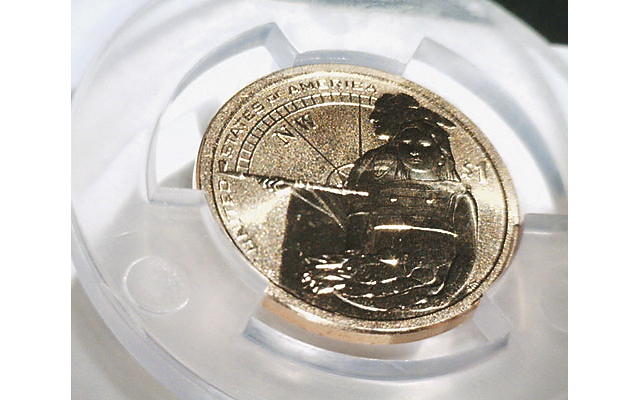 The currently only known example of an Enhanced Uncirculated 2014-D Native American, Missing Edge Lettering $1 coin resold in a Feb. 15 television auction for more than double what it sold for a week before in an online auction.

The coin, graded Enhanced Uncirculated 69 by ANACS and labeled as “Missing Edge Lettering,” realized $12,934.90 in a Feb. 8 online auction by GreatCollections. The price realized in the Feb. 8  sale also included a 10 percent buyer’s premium.

The coin has none of its mandated edge inscriptions. The edge’s intended incuse inscriptions are the date, Mint mark, E PLURIBUS UNUM and 13 stars.

The price received in the Feb. 8 sale was, at the time, according to error coin specialist Fred Weinberg from Fred Weinberg & Co., Encino, Calif., a record price for the error type.

Consigned to the Feb. 8 online auction by First Commemorative Mint from Farmingdale, N.Y., the Enhanced Uncirculated coin is the only one with the error from the 5,000 2014 American $1 Coin and Currency sets that FCM submitted to ANACS.

AAN host Adam Miller said: “In the course of showing it we had a few offers and I ultimately got an offer that [the] investor would accept which ended in a sale price of $31,900.”