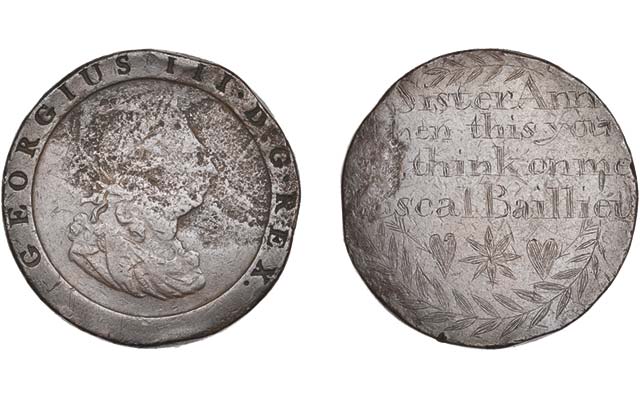 Pascal Baillieu’s plea to his sister Ann not to forget him was recorded on a George III penny in 1837. The engraved coin highlights Dix Noonan Webb’s May 13 auction. 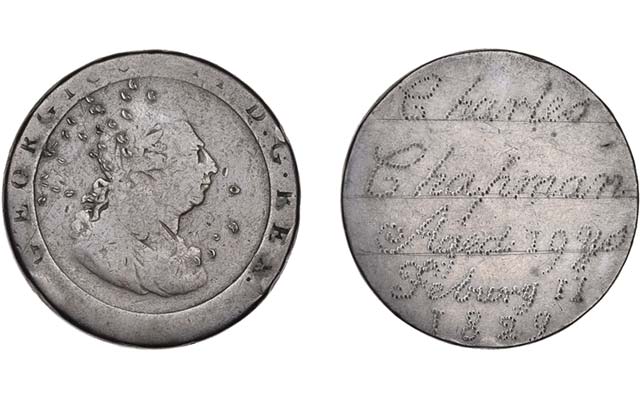 In 1829, when he was 19 years old, Charles Chapman was transported to Australia for life. Chapman engraved this 1797 George III penny the month before his punishment.

Britain’s harsh early 19th century penal system sentenced many people to be transported to Australia for offenses that would not now be regarded as major crimes. Some were sent to the other side of the world for life, others received fixed sentences, but for all there was the heartbreaking prospect that they might never see their families again.

To give their loved ones a memento to remember them by, some convicts engraved their names and messages on coins and some of these “transportation tokens” are to be auctioned by Dix Noonan Webb at its sale of Coins, Tokens and Historical Medals in London on May 13, 2015.

The most moving of these messages was stipple-engraved on a 1797 George III penny by Pascal Baillieu, who, ironically, had been convicted of forging counterfeit coins and being in possession of impressions and moulds for coining.

He was sentenced to seven years transportation at Bristol Quarter Sessions on Oct. 9, 1837. Pascal had been born in Bristol in 1804 and was evidently very fond of his sister Ann, who was two-and-a-half years younger. Before he sailed for New South Wales on the Lord Lyndoch in April 1838 he engraved: ‘Sister Ann when this you see think on me. Pascal Baillieu.’

Unlike many convicts who were transported for life or who chose to stay in Australia when their sentences ended, Pascal returned to England after receiving his Certificate of Freedom in December 1844. So perhaps and he and Ann were reunited. His transportation token, which is in fair to fine condition, is expected to fetch £150 to £200 at the Dix Noonan Webb auction.

The fate of Charles Chapman, who was sentenced to transportation for life at Worcester Assizes in March 1829 for an unspecified offence, is less clear. As he awaited sentence, probably aware of his impending fate, he stipple-engraved ‘Charles Chapman, Aged 19 yrs, Febury (sic) 11 1829’ on another 1797 George III penny.

Presumably the engraved coin was handed to a relative before he embarked on the Katherine Stewart Forbes in October 1829, arriving in New South Wales the following February. Chapman probably never saw his family again.

His transportation token, which has deliberate pitting on the obverse while the reverse is About Very Fine, is estimated at £200 to £300.

Both these pieces are from the collection of engraved coins formed by the late Richard Law, who was born in Huddersfield, West Yorkshire in 1943. On leaving school Law took a job in the textile business.

He became a wool buyer and, after the industry’s decline, worked in the office of a local iron foundry. It is thought that the gift of an 1838 Victorian threehalfpence from his father in 1960 triggered his lifelong interest in collecting coins, historical medals and postcards. He became President of the Huddersfield Numismatic Society and Treasurer of the Huddersfield Postcard Society. Law died in 2014.

To find out more about the sale visit the auction firm’s website.