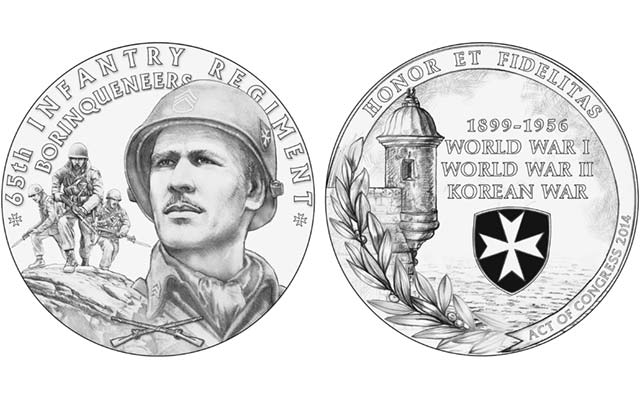 A decision on designs for a congressional gold medal being awarded in 2015 to the Borinqueneers of the 65th Infantry Regiment was among the items on the June 16 agenda of the Citizens Coinage Advisory Committee.

The Borinqueneers were members of a segregated, Puerto Rican military unit that served during World Wars I and II and the Korean War. The unit was established in 1899 and dissolved in 1959.

The medal is authorized under Public Law 113-120 and recognizes the Korean War achievements of the regiment.

According to the legislation, Secretary of the Army Louis Caldera said in 2000 that "[t]he men of the 65th who served in Korea are a significant part of a proud tradition of service" that includes the Japanese American 442nd Regimental Combat Team, the African American Tuskegee Airmen, and "many other unsung minority units throughout the history of our armed forces whose stories have never been fully told."

Here is a comprehensive collection of the designs reviewed by the CCAC on June 16: