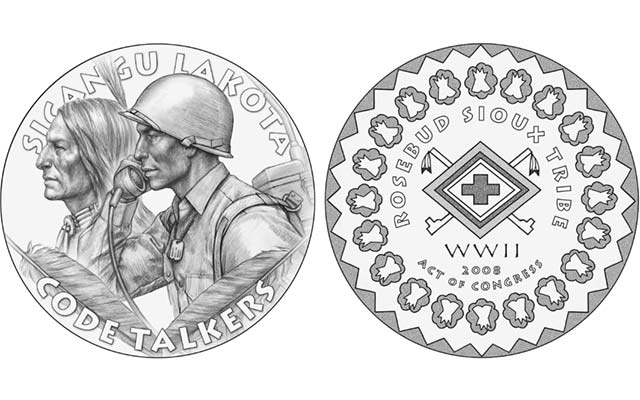 The CCAC met in conjunction with the American Numismatic Association National Money Show in Portland.

The Rosebud Sioux Tribe Code Talkers congressional gold medal is the 29th of 33 scheduled medals authorized under provisions of the Code Talkers Recognition Act of 2008.

The Rosebud Indian Reservation in Rosebud, S.D., is home to the federally recognized Sicangu Oyate — also known as Sicangu Lakota, and the Rosebud Sioux Tribe, a branch of the Lakota people.

For the medal's obverse design, the CCAC recommendation depicts a World War II code talker and Sicangu Lakota warrior overlapping, in profile, facing left. The code talker wears his dog tags from his neck, while the warrior wears an eagle feather in his hair and a traditional bone-and-bead choker around his neck. Eagle feathers appear along the design's bottom border.

Donald Scarcinci, a CCAC member and medallic art specialist, suggested that when the design is sculpted, the Lakota warrior could be rendered incuse, reminiscent of sculptor Bela Lyon Pratt's Indian Head designs for the gold $2.50 quarter eagle and $5 half eagle from the early 20th century.

Matt Witt, representing the Rosebud Sioux Tribe, said during the CCAC meeting March 5 that the CCAC-recommended obverse is also the design the tribe prefers because it best reflects the image of a Lakota warrior. Witt said there were concerns raised that the warrior on a second proposed obverse bears facial features resembling members of another tribe.

CCAC members raised questions as to whether the rendition was realistic in showing the code talker soldier wearing his dog tags outside his shirt while having his long shirt sleeves rolled out and buttoned during combat in the South Pacific.

April Stafford, the U.S. Mint's chief of design development, said all proposed designs for military-themed coins and medals are vetted with the Department of Defense, and no objections were raised by that department.

The recommended reverse for the medal depicts the Rosebud Sioux Tribe seal. Witt said tribal representatives rejected the other reverse design proposed because it did not accurately depict the seal's elements.

Bronze duplicates of the gold medal will be offered in 1.5-inch and 3-inch sizes for sale, at a later date.