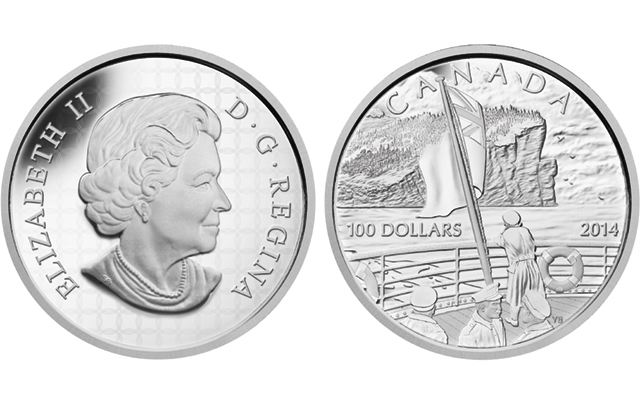 An uncommon perspective of soldiers seeing their homeland for the last time before heading off to war appears on the reverse of Canada’s new Proof silver $100 coin marking the anniversary of the start of World War I.

World War I, dubbed “the war to end all wars,” didn’t live up to that moniker, but 100 years later is remembered for shaping the course of history.

The war was sparked by the June 28, 1914, assassination of Austrian archduke Franz Ferdinand and his wife. In the months that followed, the conflict would enlarge until foes around the world were pitted against each other.

The reverse is a tribute to those who left their homeland and their loved ones to serve as part of the First Contingent of the Canadian Expeditionary Force.

Designed by Canadian artist Yves Bérubé, the reverse captures a departing soldier taking one last look at the Canadian coastline in a scene from October 1914, as the SS Megantic is among the ships transporting the first Canadian troops to British soil in the early days of the war.

“One soldier is leaning against the stern’s guard rail, his back momentarily turned on his shipmates who have gathered on the deck,” according to the Royal Canadian Mint. “With the Canadian Red Ensign softly flapping in the breeze overhead, the soldier takes a long look at the soaring cliffs of the Gaspe Peninsula as the ship brings him closer to the battles that surely lie ahead.”

This sight would prove to be the last glimpse of Canada for many of its soldiers.