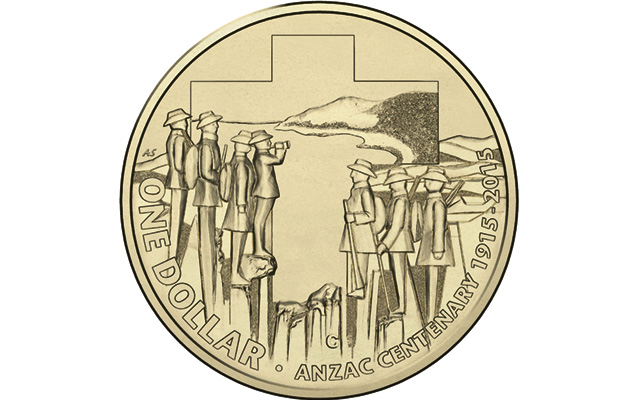 The Royal Australian Mint remembers the ANZAC centenary and the Battle of Gallipoli with a 2015 circulating $1 coin. Visitors to the Mint in Canberra can strike a special version bearing a C Mint mark. 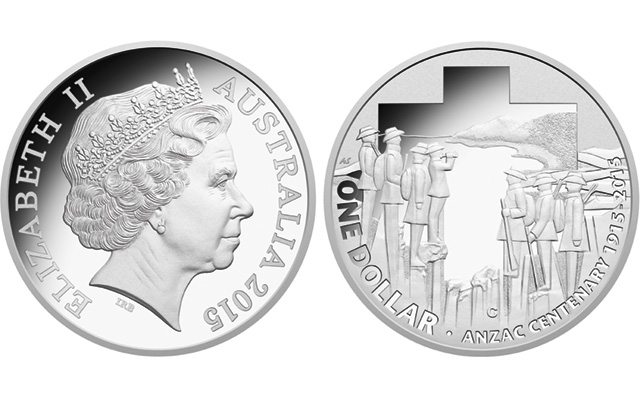 In addition to the base metal $1 for the ANZAC and Gallipoli anniversary, the Royal Australian Mint has issued a Proof .999 fine silver $1. 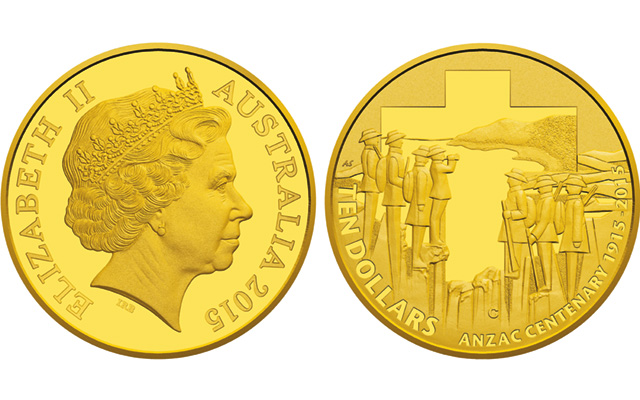 At the stroke of midnight to close 2014 and begin 2015, the Royal Australian Mint’s newest coin became available for striking.

As for the last three years, the same Sydney teenager, Harley Russo, was the first in line. He struck the first coin of 2015 anywhere in the world.

The coin commemorates the 100th anniversary of the Gallipoli Campaign and the role of the Australian and New Zealand Army Corps (ANZAC) in that 1915 effort. Australian, New Zealand, British and French soldiers were sent to Gallipoli to thwart the Ottoman Empire, an effort that proved unsuccessful and is somberly remembered a century later.

Designed by Aleksandra Stokic, the reverse background includes a depiction of the coastline along the Gallipoli Peninsula. In the foreground soldiers stand sentinel as a bugler sounds the Last Post. A cross formed within the design is a symbol of the lost and a link to the war cemeteries of World War I where they were interred, according to the RAM.

The aluminum-bronze dollar is available for $3 to on-site visitors only, and bears the C Mint mark for Canberra.

In addition to the coins struck at the Mint's gallery presses, the RAM has issued Proof .999 fine silver $1 and Proof .9999 fine gold $10 collector versions of the design.

Mint CEO Ross MacDiarmid said in a press release, “The Mint takes its role as a chronicler of Australian stories very seriously, in particular when commemorating our role in the First World War. Not only does this provide visitors to the Mint with a memento of Canberra and their visit, it also provides the opportunity for the general public to share in a piece of Anzac Centenary history.”

The gold coin weighs one-tenth-ounce and measures 17.53 millimeters in diameter. It retails for $300.

These and other coins in the Anzac Centenary range are available via the Royal Australian Mint’s eShop.