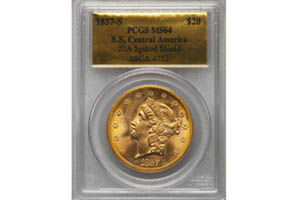 More than 5,000 1857-S Coronet $20 double eagles were found from during the initial recovery of the SS Central America shipwreck two decades ago. This example, graded Mint State 64 by Professional Coin Grading Service, carries a special gold label and brought $9,400 at a Feb. 4, 2014, Heritage auction.

Mark Gordon, Odyssey Marine Exploration's president and chief operating officer, said that the firm expects to recover the remaining cargo from the SS Central America as soon as April 2014, since Odyssey has access to previous records and images that provide a solid overview of the shipwreck.

The Central America, nicknamed the “Ship of Gold,” sank approximately 160 miles off of the coast of South Carolina in September 1857 and was one of the largest documented shipments of gold ever lost at sea. The shipwreck site was discovered in 1987 by Columbus-America Discovery Group at a depth of approximately 7,200 feet.

Gordon said that the recovery mission is part of a larger plan to recover existing shipwrecks in cases where legal issues are resolved prior to cargo recovery.

Gordon pointed to the firm’s success in 19th century paddlewheel shipwrecks, such as the recovery of 51,000 coins and 14,000 artifacts from the SS Republic a decade ago. Among the coins recovered from that Civil War-era shipwreck were 2,675 Coronet $20 double eagles and 1,460 Coronet $10 eagles.