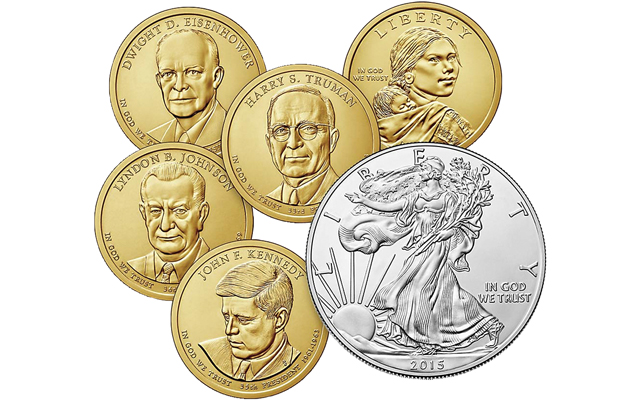 The following news release from the U.S. Mint concerns the June 16 launch of sales of the 2015 Uncirculated Dollar Coin Set:

The set is priced at $46.95 and contains the following six uncirculated $1 coins in production this year:

Struck at the United States Mint at Philadelphia. The obverses (heads sides) of these coins have the images of Harry S. Truman, Dwight D. Eisenhower, John F. Kennedy, and Lyndon B. Johnson, while their reverses (tails sides) have a striking rendition of the Statue of Liberty.

This coin was struck at the United States Mint at Denver. Its reverse depicts a Mohawk ironworker reaching for an I-beam that is swinging into position, rivets on the left and right side of the border, and a high elevation view of the city skyline in the background. The coin’s obverse continues to feature the image of Sacagawea.

This obverse of this coin depicts Adolph Weinman's image of Walking Liberty, and the reverse features a heraldic eagle with shield, an olive branch in the right talon, and arrows in the left on the reverse. The American Eagle Silver Coin is struck using a .999 fine silver blank and bears the “W” mint mark, indicating its production at the United States Mint at West Point.

Orders will be accepted at http://catalog.usmint.gov/coins/other-coins/ and at 1-800-USA-MINT (872-6468), while hearing- and speech-impaired customers with TTY equipment may order at 1-888-321-MINT. Please visit the United States Mint website for information on shipping options: catalog.usmint.gov/customer-service/shipping.html.