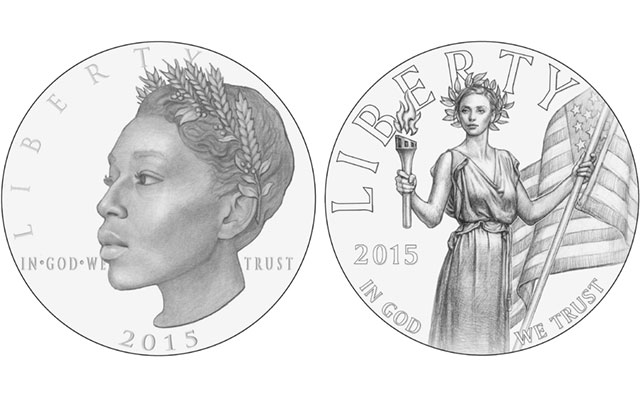 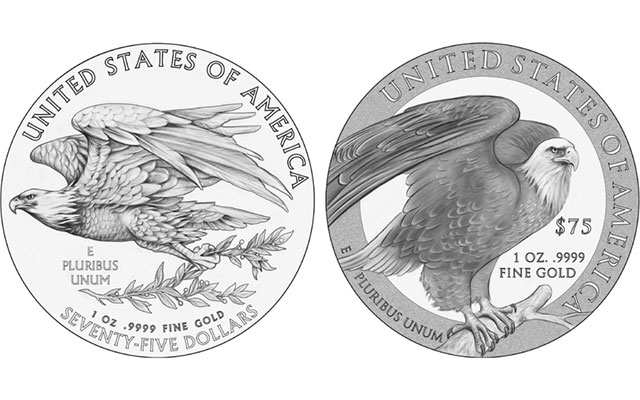 Two proposed reverse designs were recommended for the reverse of the $75 High Relief gold coin to be released later this year by the U.S. Mint.

The upcoming 2015 1-ounce, .9999 fine gold $75 coin will be struck by the United States Mint at the West Point Mint in High Relief, not Ultra High Relief as originally conceived.

Of the two obverses the CFA recommended, one depicts a wreathed bust of Liberty, with the date 2015 and inscriptions LIBERTY and IN GOD WE TRUST. The second obverse depicts Liberty standing, crowned with leaves, holding an American flag on staff in her left hand and a torch in her right.

Of the two reverses that received CFA recommendation, one features an eagle in flight, clutching olive branches, with inscriptions UNITED STATES OF AMERICA and E PLURIBUS UNUM. The denomination is presented as SEVENTY-FIVE DOLLARS and the weight and fineness as 1 OZ. .9999 FINE GOLD.

The second reverse recommended depicts an eagle perched on a branch ruffling its wings that extend off the edge of the coin design. UNITED STATES OF AMERICA and E PLURIBUS UNUM are inscribed around. The weight in gold and fineness appear in two lines in the field in front of the eagle as 1 OZ. .9999 / FINE GOLD. The denomination appears as $75.

"When this concept was discussed at the CCAC [Citizens Coinage Advisory Committee] in July 2014, it was presented as an ultra high relief product," Tom Jurkowsky, director of the U.S. Mint's Office of Corporate Communications said via email Jan. 22. "At that time, however, we were careful to indicate that the Mint was 'considering' the 'possibility' of such a product as we were very early on in concept development. Since that time, Sales and Marketing (in concert with Manufacturing) determined that the aesthetics of the design would benefit more from being on a wider diameter planchet as opposed to a smaller, thicker one that is required when creating an 'ultra high' relief coin. This decision was arrived at in August 2014 before the Mint requested approval from the Secretary of the Treasury to produce this product."

Exact specifications for the gold coin and companion silver medal won’t be disclosed for several months, according to Adam Stump, deputy director of the U.S. Mint’s Office for Corporate Communications. Testing is still being done at the Philadelphia Mint, he said.

The $75 face value is the first time that denomination will appear on a U.S. coin.

It is not known what the depth of relief will be for the High Relief gold $75 coin or what planchets might be used in its striking. It is also not disclosed what depth of relief will be used for the silver medal nor what planchets will be employed in its production. Edge ornamentation for the collar dies is also not yet determined. The finish for both the coin and medal have not yet been determined.

The same designs are to be reviewed during a two-day session Jan. 27 and 28 in Washington, D.C., by the Citizens Coinage Advisory Committee for their recommendations. The recommendations from both panels along with those of the the Mint will be forwarded to the Treasury Secretary for final approval.

In 2009, the U.S. Mint issued a 27-millimeter Saint-Gaudens, Ultra High Relief 1-ounce, .9999 fine gold $20 coin to mimic one version of sculptor Augustus Saint-Gaudens' original intention in 1907 for an Ultra High Relief coin. The 2009 coin, struck without Mint mark at the West Point Mint, bears on its edge single six-pointed stars separating each letter in the motto E PLURIBUS UNUM.

The U.S. Mint currently issues a 1-ounce, .9999 fine gold coin in the American Buffalo gold $50 coin. The planchets used to strike those coins are 32.7 millimeters in diameter.