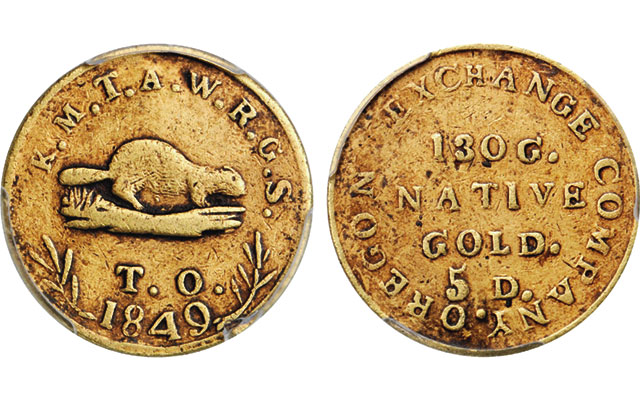 The charming beaver on a log motif used on the 1849 Oregon Exchange Company pioneer gold $5 piece has long been popular with collectors. This example grades Very Fine 35.

It was minted in 1849 in Oregon City, which Q. David Bowers notes in the introduction is located not far from the site of the auction. The coin is graded Very Fine 35 by Professional Coin Grading Service and the description relates that the Oregon Exchange Company was established by Oregon City residents in early 1849.

The charming beaver on a log motif utilized on the obverse remains popular with collectors today, with a popularity that extends beyond pioneer gold coin collectors.

The Oregon Exchange Co. also produced $10 coins. Click here to learn more about a $10 example in the National Numismatic Collection.

Roughly 6,000 examples were struck until mining operations ceased in September 1849, and most were melted. “While no effort was made to standardize the alloy, the coiners compensated for this by deliberating making the coins overweight. U.S. Mint assays report that the five dollar coins were valued at $5.50. While this helped to guarantee their acceptance, being worth more than their stated value ensured that the pieces would be taken in at face and melted down for their intrinsic value,” the description explains.