12 Days of Christmas: Star of Bethlehem 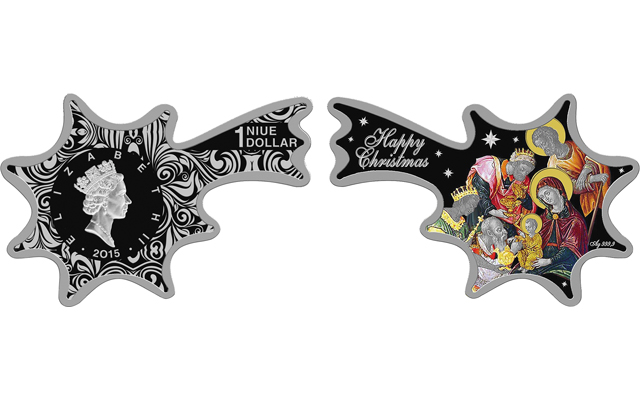 The Star of Bethlehem or Christmas Star guided travelers to visit the newborn Christ child. A star-shaped coin from Niue features what Renaissance-style painting of the Adoration of the Magi.

Though Christmas may signify spending time with family and giving to others, for many the holiday focus extends to the eternal, in celebration of the birth of Jesus Christ.

The Star of Bethlehem, also known as the Christmas star, is mentioned in the Bible story of the birth of Christ. The star is what brought the Three Wise Men or so-called Magi to Bethlehem, where Mary and Joseph had traveled for a census. It is there in Bethlehem, in a humble stable, that the Bible records the birth of Jesus.

This event is recorded on a 2014 Christmas star coin from Niue issued through private distributor International Coin House.

The Proof .9999 fine silver dollar features a colorful Renaissance-era scene of the adoration of the magi, with the three travelers, proud parents and the newborn.

What makes this coin a stellar choice for Coin World’s “12 Days of Christmas” list is its star-like shape, meant to evoke the movement of a star across the sky.