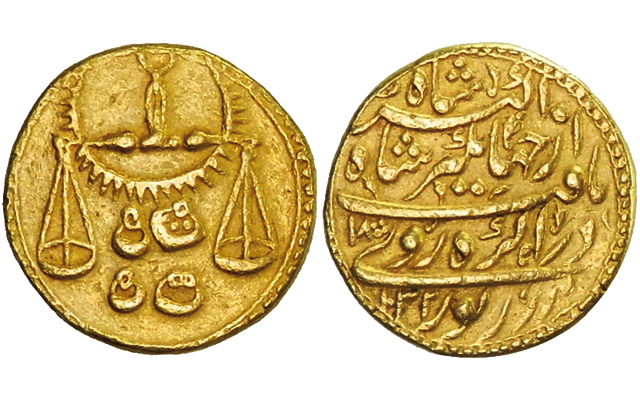 A rare gold Zodiac mohur of Mughal emperor Jahangir, with scales indicating the Libra zodiac sign, is estimated at $35,000 to $45,000 in Stephen Album Rare Coins auction Sept. 18 to 20.

The circa A.H. 1032 coin was issued during the reign of Nur-ud-din Mohammad Salim, who is known by his imperial name Jahangir. Jahangir may have been a coin collector, Album said, because of the array of special issues during his 23-year-reign, ending with his death in 1628.

The example in Album’s auction features scales, indicating the Libra zodiac sign. Album said it is only the second Libra mohur to be sold at auction in eight years.

Zodiac gold mohurs and silver rupees were introduced in A.H. 1027 (1618 to 1619) by Emperor Jahangir, and produced in gold for five years, at the Agra Mint, and in silver for just five months, at the Ahmadabad Mint.

Today the mohurs and rupees are often encountered with holes, mount damage and wear from their use in jewelry or decoration.

The sale, to be held at Album’s offices in Santa Rosa, Calif., includes the Nicholas Rhodes Collection of Chinese Cash Coins and the Dr. John Lund Collections of Norwegian and Danish India Coins.