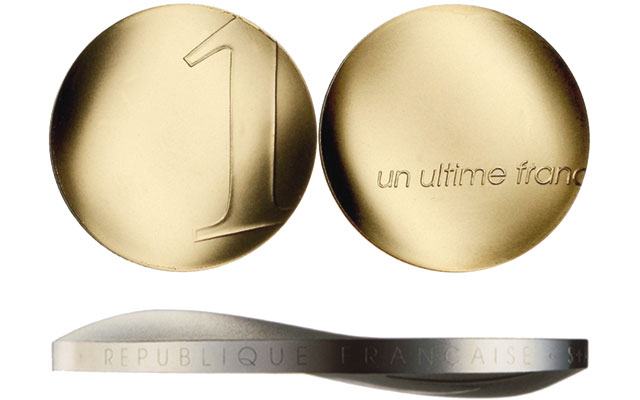 A gold example of “un ultime franc,” a 2001 French coin with a wavy cross-profile, is offered in Teutoburger Münzauktion’s Feb. 26 and 27 auction.

Images courtesy of Teutoburger Münzauktion and the Monnaie de Paris.

Convex/concave coins are being issued in increasing abundance since technology developed by the Monnaie de Paris has been adopted and adapted at mints in Australia, Poland and the United States.

One technology developed by the French Mint that has not been duplicated is the wavy technique used one time only, for a special release in 2001. A gold example of “un ultime franc,” the ultimate or final franc is offered in Teutoburger Münzauktion’s Feb. 26 and 27 auction in Borgholzhausen, Germany.

The coin‘s profile or side view was intentionally shaped like a wave. According to the Monnaie de Paris at the time of its Sept. 15, 2001, release, the coin’s obverse and reverse sides “have a pure and minimalist design in which everything ‘disappears’ in order to be to the edge.”

The coin was designed by famed French artist Philippe Starck.

A .900 fine silver version and a .750 fine gold version were issued, both measuring 33 millimeters in diameter. The gold coin weighs 26.1 grams and has a mintage of 4,963 pieces.

Like many new mint issues, obtaining them years after release is harder than collectors might imagine. However, Teutoburger specializes in offering modern issues, as well as the historic.

The example in the Teutoburger auction is still in its original box with the certificate of authenticity. It is estimated to realize €600 (about $685 U.S.). Its precious metal value is about $793 at press time.

For information about the sale, visit the firm’s website.