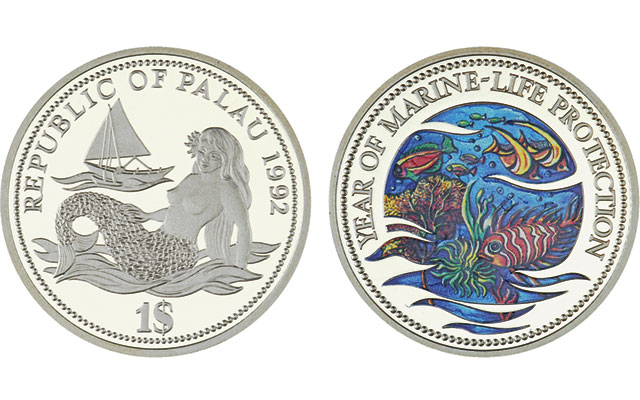 The certificate of authenticity from a Minneapolis company erroneously identifies this colored 1992 Palau dollar as a “genuine legal tender coin.” Palau was not independent and legally able to issue coins until 1994. 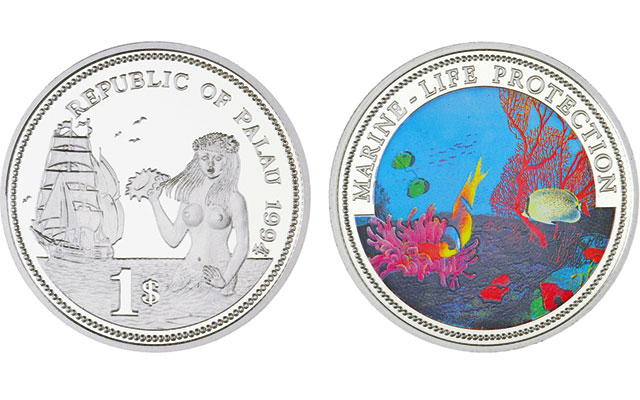 Since 1994 was the year Palau became independent, it was also the first year that coins from Palau can be considered legal tender. This dollar has a colorful coral reef on the reverse. 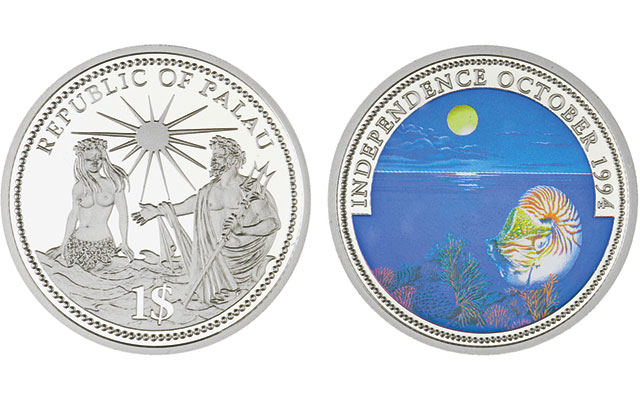 Editor's note: This is the first part of a multi-part series prepared by Rita Laws for Coin World's February 2015 monthly issue about the world's first mint-colored coin.

Definitions are critical to this question.

To be considered a “mint-colored coin,” a coin must first of all be a coin, meaning it is legal tender in the nation of issue. And if a coin is vying for a title like “World’s First Colored Coin,” the nation that the coin represents had better be recognized. This means that it has been acknowledged by an international body such as the United Nations, or by mutual agreement of the nation itself and the recognized government that was in control before independence.

Next, a coin must have had its color added or applied at the mint where it was made or by another entity that was authorized by the government of the issuing nation.

A mint-colored medal does not meet the definition of a mint-colored coin, nor does a coin colored by an after-market company.

So which nation issued the first one? Some point to the Pacific island of Palau, and Palau is well known for both colored coins and mermaid coins.

The Compact of Free Association with the United States was ratified in 1993 and went into effect on Oct. 1, 1994, making Palau independent de jure (in law) in that year.

Palau was independent de facto (in fact) on May 25, 1994, when the trusteeship was canceled, but either way, actual independence occurred in 1994.

Palau itself issued a special dollar in 1994 proclaiming its independence as occurring that year. Therefore, the 1992 and 1993 Palau issues are definitely not legal tender (or are technically “illegal” tender) because Palau, as part of the United States, had no authority to mint its own coins. To this day, the U.S. dollar remains the currency of this nation, but only since 1994 has Palau had the right to mint its own collector coinage.

So what are the 1992 and 1993 colored dollars of Palau, if not coins? They are something between a fantasy and a pattern. A fantasy is a coin-like item with no legal value and created without government sanction. Patterns are the officially produced test coins of a nation.

If there was a numismatic term defining a “pre-nationhood pattern,” then the 1992 and 1993 Palau coins might qualify. Failing that, these are technically the fantasy coins of a U.S. territory.

No nation issued a mint-colored coin prior to or during 1992. That brings us to 1993. In this year, two nations issued colored commemorative coins, both as parts of series, and both minted at the same place, an undetermined mint in South Africa (the South African Mint in Pretoria did not respond to an inquiry about whether they were involved with the production of these coins).

The title of “World’s First Mint-Colored Coin” goes to both Uganda and Equatorial Guinea. It’s a tie.

It is no surprise that they were struck by the same mint. The 1993 to 1994 Equatorial Guinea colored Dinosaur series and the 1993 to 1994 Uganda Famous Places program comprise coins with very different themes, but the overall appearance of the applied color is very similar with both series.