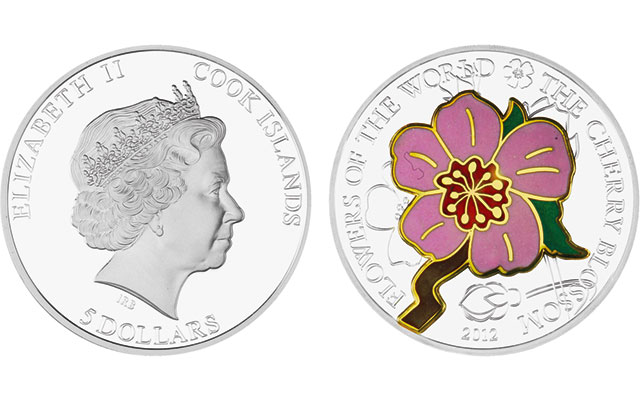 A new take on an ancient enameling process, this 2012 Cook Island coin has a 3-D cloisonné cherry blossom sitting on top of the surface of the .925 fine silver coin. Cloisonne is a labor-intensive process where cells, created with gold wire, are filled with multiple layers of color, usually by firing colored silica after each layer is applied. 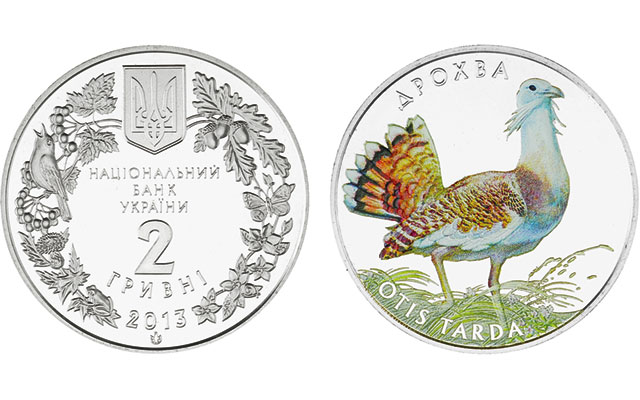 The second major coloring process is demonstrated by this 2013 Ukrainian coin. The producing mint selectively colorizes part or parts of the design using paint or ink that is applied with a computerized process. The male great bustard (Otis tarda) of Ukraine is one of the heaviest flying animals in the world, weighing up to 40 pounds. 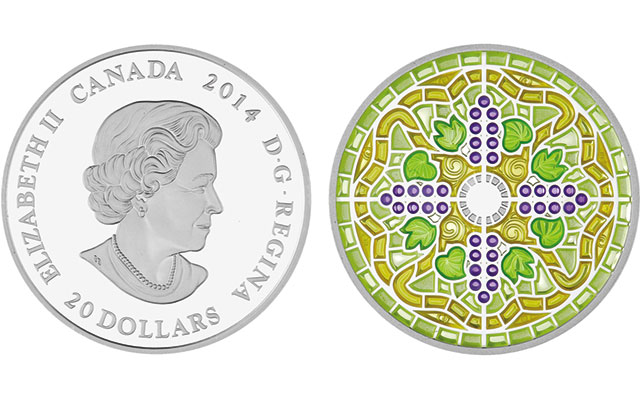 Part of a series replicating famous Canadian stained glass windows, but without the use of glass, this coin features the domed window of Toronto’s Casa Loma mansion. The surface of the silver coin is covered in translucent or opaque enamel so that it can reflect light. The enamel in each individual section of the coins is filled by hand as part of a cold enamel process.

Editor's note: This is the final part of a multi-part series prepared by Rita Laws for Coin World's February 2015 monthly issue about the world's first mint-colored coin.

What does the future hold for this collecting specialty? Twenty-one years after the world’s first colored coins debuted, many nations belong to the “Color Club.” As of this writing, 7,736 listings in world and Canadian coin areas on eBay bear the words “color” or “colour” and their past tense versions in the title. Another 6,517 listings showed up in the recently sold categories of those same online areas.

Color coin enthusiasts are happy to see the trend continue to grow, in part because there is little reason to hope that the United States of America will have an officially colored coin any time soon.

Millions of aftermarket colored U.S. State quarter dollars, silver American Eagles and Kennedy half dollars attest to U.S. demand for colorful coinage, but the U.S. government has shown no interest in authorizing an issue with color.

This world color coin popularity is collector-driven, of course, because the technology does not yet exist to create color that can stand up to the rigors of everyday circulation.

Canada issued the world’s first colored circulating coin in 2004 in the form of a 25-cent coin with a poppy design. The flower’s color was protected in a dimpled cell in the center of the coin, but the concave center was not enough to keep the color from wearing away.

Newer attempts by the highly innovative Royal Canadian Mint with circulating colored coins for Canada and Papua New Guinea have met with success.

This year, the RCM issued the first two in a series of enameled coins that look like miniature stained glass windows, but without any glass.

And the RCM is not alone in pushing the envelope on this technology. The Perth Mint is mixing color with various metallic surface treatments and with dome-shaped coins. The Cook Islands recently issued a 3-D cloisonné enameled coin, a new twist on an ancient process that raises the design up using wire-created cells for the color.

The future for these and many more unusual coins looks bright and, well, colorific.