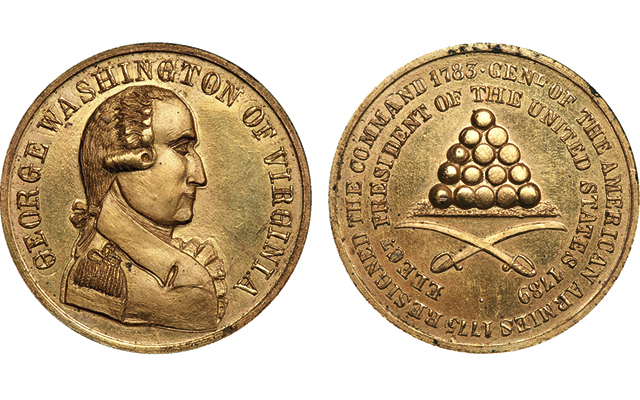 The only known George Washington of Virginia restrike medal produced in gold in 1883 was commissioned by renowned Baltimore collector T. Harrison Garrett. It is graded Proof 64 by Numismatic Guaranty Corp. 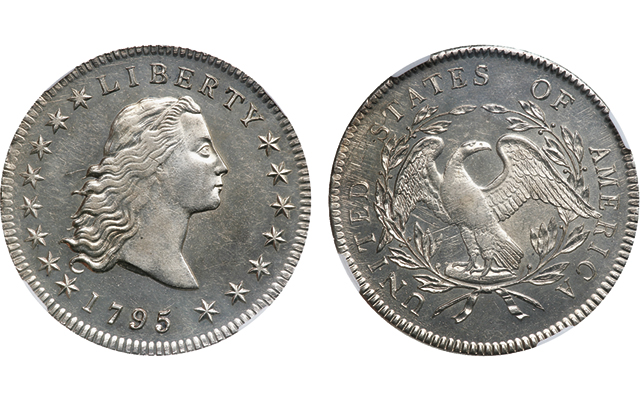 The BB-27 variety of 1795 Flowing Hair dollar is one of several varieties with the Three Leaves reverse and Head of 1795 portrait. The BB-27’s most recognizable feature is a raised line some call a “die bar visible at the back of Liberty’s hair at the top curl. The example illustrated is graded NGC Mint State 61. 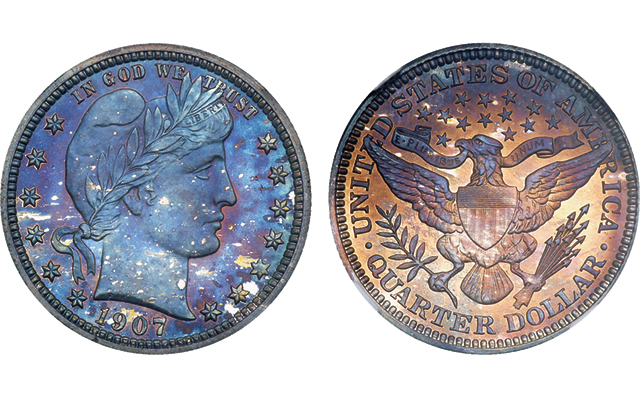 This 1907 Barber quarter dollar, one of only 575 examples to have been struck in Proof, is graded NGC Proof 68.

The restrike medal was produced under commission from Baltimore numismatist T. Harrison Garrett.

The 1,464-lot sale of United States coins and medals is to be held at the firm’s galleries at 11400 W. Olympic Blvd., Suite 800, in Los Angeles. An additional 1,091 lots comprising ancient and world coins will be offered Sept. 2.

A 17.5 percent buyer’s fee will be added to the final closing hammer price of each lot sold.

The gold restrike medal, recently graded and encapsulated by NGC, is based on the Baker 64 variety as cataloged in Medallic Portraits of Washington by W.S. Baker. The restrike medal is reported to have been struck in January 1883, according to the Baker reference.

Measuring 34.3 millimeters in diameter with a plain edge, the high relief gold medal weighs 2.3 ounces and is 4.5 millimeters thick.

According to the auction lot description, the dies from which the Washington medal was restruck in gold were originally prepared by German-born engraver Selig Baumgarten circa 1860.

One of Baumgarten’s sons, Herman Baumgarten, later engraved the 1877 version of the Great Seal of the United States.

Only three original Washington of Virginia medals were struck in 1860, one each in copper, brass, and lead.

Dr. George Massamore, a Baltimore dentist and part-time coin dealer, acquired the original 1860 medal dies in 1882, according to the Goldbergs’ auction lot description.

Dr. Massamore arranged for the production of 63 restrike medals in January 1883 — 21 each in silver, copper and brass.

Garrett, one of Dr. Massamore’s numismatic customers, learned of the medals being restruck and ordered the only example known to be have been produced in gold.

The reverse depicts a pyramid of 15 cannon balls, with two crossed swords below. The reverse is inscribed with a reference to Washington as general of the American Armies in 1775, as well as having resigned his commission in 1783, and having been elected president in 1789.

A collector seeking to assemble a type set of U.S. coins may consider the readily available BB-27 variety of Flowing Hair dollar, of which 2,500 to 3,500 examples are known, according to the Bowers-Borckardt reference.

The reverse has a few identifiable small surface adjustment lines (as made during the minting process) that appear in the left half of the design from rim to eagle's legs.

The most recognizable aspect of the BB-27 variety is a raised line some call a “die bar” common to all BB-27s and visible at the back of Liberty’s hair at the top curl.

According to the auction lot description, the BB-27 variety is one of several varieties with the Three Leaves reverse and the Head of 1795 obverse.

“In this case, the portrait of Liberty is in a high-relief rendering on the finished coins,” according to the auction lot description. On the obverse, Liberty’s lowest curl is open and distant from star one.

According to the Bowers-Borckardt reference, because of the resulting high relief of the obverse portrait due to the depth of the die, “the hair wore quickly at the center of the obverse, with the result that pieces grading VF [Very Fine] or lower usually have little detail still remaining.”

Only 575 examples of the 1907 Barber half dollar are reported to have been struck in Proof condition.

The 1909 date is reported to have had 650 examples struck in Proof.

The two Proof coins offered in the auction both exhibit original toning.

Both the 1907 and 1909 Proofs being offered by the Goldbergs are near the top of the grade census for each date, with only two submissions graded higher by NGC for both dates, at Proof 68?.