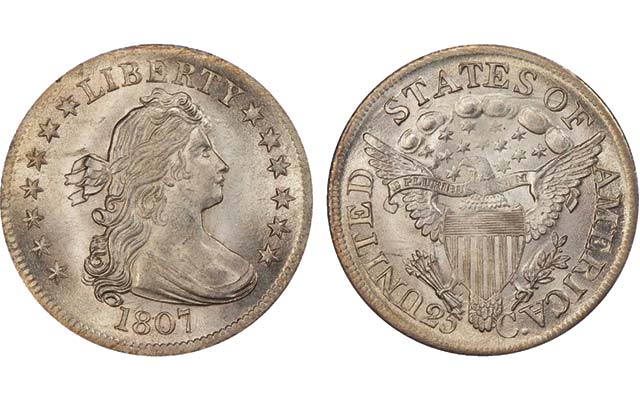 Although the vast majority of the coins in the Pogue Collection were toned in rich colors, a few were untoned and richly lustrous, such as this 1807 Draped Bust quarter dollar graded MS-65+ by Professional Coin Grading Service  that sold for $141,000 against an estimate of $120,000 to $175,000.

The Pogue sale represented the first time that this coin — which the catalog notes looks today “much as it must have when it first crossed the front doorstep of the Mint onto Seventh Street” — has appeared at auction. It was discovered in London about 25 years ago and was acquired by Pogue in 2004 as part of his purchase of the Foxfire Collection.

Two varieties of the 1807 Draped Bust quarter dollar are known, and neither is rare, making this issue a typical choice for type collectors. PCGS has graded just one finer in MS-67 and that example last traded at auction in 1997 at Bowers and Merena’s auction of the Louis E. Eliasberg Sr. Collection where it sold for $165,000.