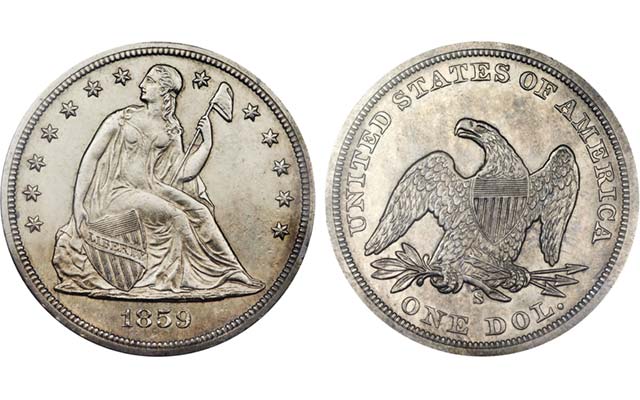 A Mint State 63 1859-S Seated Liberty silver dollar, struck at the San Francisco Mint, is the topic of question 11.

Here’s a short quiz to test your numismatic knowledge. Answers are at the end:

(1)?In July 1792 silver half dismes were struck: A: at the Philadelphia Mint; B: by Matthew Boulton under contract; C: in Trenton, N.J.; D: in the machine shop of John Harper.

(4)?Generally considered to be the most skilled cataloger of coin auctions in the 1860s was: A: Henry Chapman; B: W. Elliot Woodward; C: B. Max Mehl; D: Harold P. Newlin.

(5)?Augustus B. Sage, who was the primary founder of the American Numismatic Society in 1858, was: A: British immigrant; B: a teenager; C: a New York City watchmaker; D: a Harvard graduate.

(6)?In 1895: A: Treasury stocks of gold coins were severely depleted; B: the Carson City Mint struck coins for the last time; C: the Klondike Gold Rush began; D: no silver dollars were struck at the New Orleans Mint.

(7)?Felix O. Schlag is recalled as: A: designer of the Jefferson nickel; B: president of the American Numismatic Association 1944 to 1948; C: developer of the numerical grading system; D: director of the Denver Mint in 1906.

(11)?1859-S silver dollars were: A: minted at the request of San Francisco merchants; B: struck in 92 percent instead of 90 percent silver alloy; C: all melted at the Mint; D: mainly distributed in Nevada.

(12)?In 1960 J. Oliver Amos chose coins from among three hobby/recreation categories to launch Coin World. Another topic considered was antiques and the third was: A: automobiles; B: bowling; C: fishing; D: baseball.