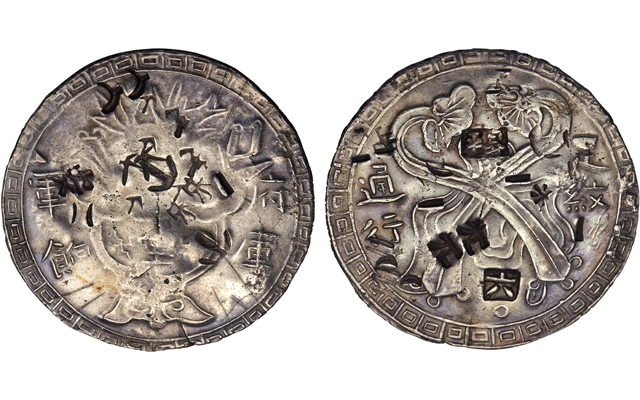 Designs are almost secondary on the circa 1853 silver Ju-I military ration dollar in Heritage Auctions’ sale.

The undated coin was the result of a military uprising in Fung Shan, Taiwan, in 1853.

To pay troops and meet other expenses, Ju-I and Bi Pao military ration dollars were minted in the city of Tainan. A limited number of issues were struck before the uprising ended.

The two lotus branches on the reverse give this coin the nickname the “Lotus” dollar. The obverse shows a “treasure pot and tree,” according to the auction description, though Eduard Kann identifies the main design device as a vase and branches in his Illustrated Catalog of Chinese Coins (Gold, Silver, Nickel & Aluminum).

These coins all feature a few Chinese symbols that were added immediately after production, Kann wrote. But they are also often found heavily marked or “chopped” from a time when circulating silver was tested throughout China by many merchants.

The example in the Heritage auction is “moderately” chopped, according to the firm, and is graded Very Fine Details, Chopmarked, Scratched, by NGC. It is estimated at $15,000 to $20,000.