Counterstamped '25 Stone Mountain half sells for $1,710 at auction 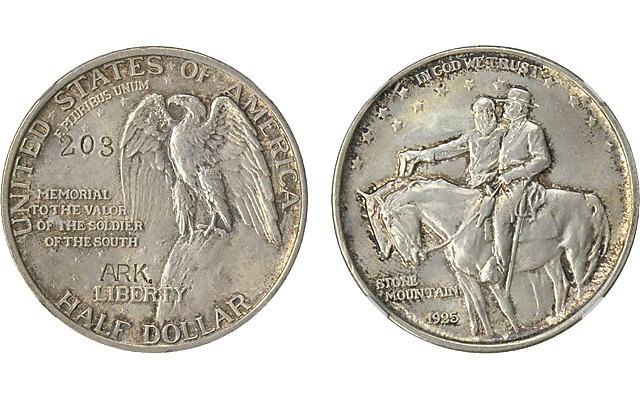 This unusual counterstamped Stone Mountain half dollar is marked ARK 203 on the reverse, a reference to the state of Arkansas where this may have been sold. Graded MS-63 it brought $1,710.50 at a July 6, 2014, online auction.

The story: Among the more plentiful of the classic-era commemoratives is the 1925 Stone Mountain half dollar. While a normal MS-63 example might sell for around $70, this one with a reverse counterstamp of ARK 203 brought a robust $1,710.50.

As reported by Anthony Swiatek in his Encyclopedia of the Commemorative Coins of the United States, these counterstamped coins were part of a private plan called the “Great Harvest Campaign” to counterstamp Stone Mountain commemorative half dollars with letters and numbers to create unique pieces.

The half dollars were marketed to Southern states and a few are known to have had certificates of ownership issued when they were sold. The same lettering styles were used for the stamps, and Swiatek proposes that they were likely produced by the Confederate Mountain Association.

As most were purchased by noncollectors, relatively few remain in Mint State condition with average examples showing wear and occasional damage.