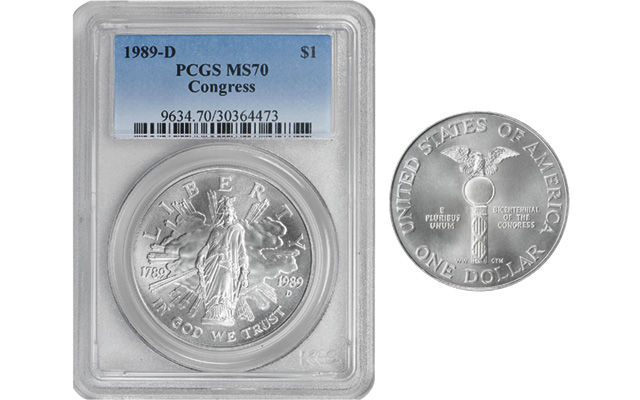 A 1989-D Bicentennial of Congress commemorative silver dollar graded MS-70 by PCGS sold for an astounding $7,150 at an Oct. 5, 2014, GreatCollections.com auction.

At an Oct. 5, 2014, GreatCollections.com auction a 1989-D Bicentennial of Congress silver dollar graded Mint State 70 by Professional Coin Grading Service brought $7,150. This past summer a different example sold for $7,485.50 in another auction.

There is a variant on this dollar that is a rarity, but the coin just sold is a “normal” one.

According to commemorative coin expert Anthony Swiatek, around 40 to 50 examples of this issue are known that have medal rather than coin alignment. In other words, on typical examples when the obverse is pointing up, the reverse is pointing down. In medallic alignment, both the reverse and obverse point up. These appear in the marketplace infrequently, but can sell for $2,000 and up.

Collectors are often surprised at the high prices achieved by the conditionally rare, high-mintage issues. Part of the surprise regarding their rarity can be attributed to broad changes in the rare coin industry.

Also, some issues are produced better than others at the U.S. Mint, having a higher percentage of coins that are without the sorts of minor imperfections that separate a MS-69 coin from one that gets a “perfect” MS-70 grade.

Depending on one’s perspective, this sale may be seen as a good value.

Lest someone think that the top prices are reserved for silver dollars, in an April 6, 2014, GreatCollections.com auction, a 1989-D Bicentennial of Congress half dollar in PCGS MS-70 condition sold for $4,180, and in a July 20, 2014, auction by the same firm a different example in the same grade brought $4,400.

The population of this issue in PCGS MS-70 is just 15 pieces, representing a tiny fraction of the 1,811 examples graded MS-69 by PCGS.