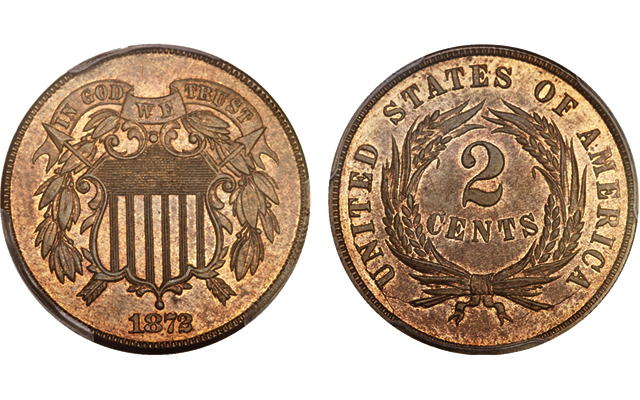 1872 was the last year of regular issue 2-cent pieces. This MS-65 red and brown example with CAC sticker went unsold at the auction but later sold privately for an amount in excess of $10,000.

Regarding quality, he reminds collectors to buy the coin and not the holder, meaning that collectors should make evaluations on quality for themselves, although he does recommend buying coins with Certified Acceptance Corp.stickers that indicate quality within the grade when possible.

Here is one of three analyses of the recently sold 2-cent coins:

The price: Unsold (at the auction)

The story: The 1872 2-cent piece is notorious for its small mintage of just 65,000 pieces. This example has the prominent doubled die obverse that is listed in The Cherrypickers’ Guide to Rare Die Varieties and is most prominent on the D of GOD in the obverse motto.

The surfaces were described as showing “some sandy-tan remaining in the fields, mainly closer to the rims, and bright reddish color within and surrounding the devices.”

While it did not sell at the auction, the consignor confirmed that it sold after the auction, privately, for a five-figure sum.

The 2-cent piece would be discontinued in 1873, when Proof examples were made for collectors, but no business strikes were produced for circulation.