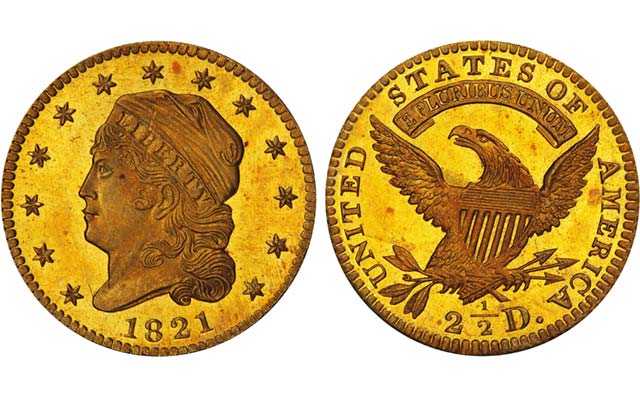 Stack’s Bowers Galleries has released details of the 105 lots of early U.S. coins to be offered Sept. 30 comprising the Part II sale of the D. Brent Pogue Collection.

The sale is scheduled to be held at Sotheby’s auction galleries at 38 E. 61st St. in New York City. Stack’s Bowers and Sotheby’s are jointly selling the collection.

Among the gold coin offerings in the sale is an 1821 Capped Head quarter eagle graded Mint State 66+ by Professional Coin Grading Service.

While PCGS’s graders certified the coin as a Mint State circulation strike, some advanced numismatists consider the piece to be an example of a Proof coin.

When Bowers and Ruddy Galleries Inc. sold it in the October 1982 sale of Eliasberg’s gold holdings, which was billed as The United States Gold Coin Collection, the auction lot listing described the coin as “Gem Proof-67.”

Only a small number of the total known are considered to be Proofs.

Dannreuther explains in his reference that it’s possible Proofs were struck on more than one date in 1821.

An 1821 Capped Head quarter eagle that is definitively identified as a Proof strike in the National Numismatic Collection does not have the cheek depression on the obverse.

A number of Mint State examples, including one from the Bass Collection, exhibit prooflike surfaces, an indication of having been struck early in the production process for circulation, according to the Dannreuther-Bass reference.

For more information on the sale and other lots to be offered, visit the Stack’s Bowers Galleries website at www.stacksbowers.com.