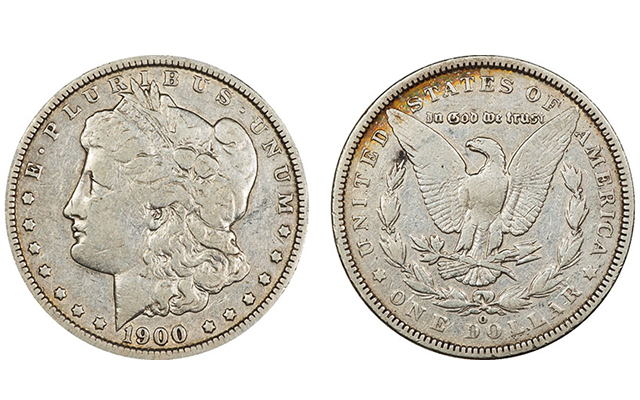 Die variety specialists have identified a counterfeit 1900-O/CC Morgan dollar, above, with die links to a series of fake Micro O silver dollars.

All images courtesy of Society of Silver Dollar Collectors.

Morgan dollar die variety specialists are reportedly excited over a recently discovered counterfeit 1900-O/CC Morgan dollar. The coin has die links to the fake Micro O Morgan dollars that specialists identified more than a decade ago and that remain popular with collectors despite their illegal origin.

According to an Oct. 25 report by the Society of Silver Dollar Collectors, the newly identified counterfeit coin pairs a known counterfeit obverse die used in making two counterfeit 1900 Micro O Morgan dollars with a fake reverse that bears an O/CC over Mint mark.

Related fakes of multiple dates were known with the Micro O Mint mark but had only been suspected for this over Mint mark (the remnants of the CC Mint mark had been obliterated on the other coins made from the die).

John Baumgart, president of SSDC, is quick to note in an email to Coin World that the discovery of the fake 1900-O/CC Morgan dollar does not condemn all varieties of 1900-O/CC dollar as fakes. Pieces long listed in standard and specialist reference books are still considered to be genuine.

Excitement over a fake

According to the Oct. 25 article published by the Society of Silver Dollar Collectors, the counterfeit 1900-O/CC Morgan dollar was first reported by Paul Vandenberg on VAMWorld, a website maintained for collectors of Morgan dollar die varieties or marriages. Vandenberg reported the coin after he determined that it did not seem to be the die variety he had ordered. He was expecting a coin that was one of the known counterfeit 1900-O Morgan, Micro O dollars — a die variety cataloged as VAM-5 in the language of specialists in the series.

Other specialists examining photos of die markers (obverse die gouges in UNUM and a clear O/CC Mint mark) on Vandenberg’s coin confirmed that it was not the die marriage that he had expected, but appeared to be a previously unidentified counterfeit marriage — a discovery that generated excitement within the die variety community. Leroy Van Allen, who with the late A. George Mallis was a pioneering cataloger of Morgan dollar die varieties, or VAMs, then confirmed it as a counterfeit 1900-O/CC Morgan dollar.

Close examination of the reverse die revealed it to be one previously identified as connected to other counterfeit New Orleans Mint Morgan dollars of various dates (1896, 1900 and 1901), though it had not been identified as bearing an O/CC over Mint mark. The remnants of the CC Mint mark are stronger on the fake 1900-O/CC coin than they are on the counterfeit dollars from the related die. According to the SSDC article, “The fact that the mint mark is clear on the 1900-O VAM 59 could indicate it was struck before the 1901-O [coin], or that a higher quality copy die was made and used with the 1900-O obverse.”

While many collectors would shy away from counterfeit coins, it is likely that VAM specialists will seek out new examples of the VAM 59 coin. As the SSDC article notes, “This discovery expands the size of the Micro O counterfeit ‘family’ of die marriages further, and gives collectors another very interesting coin to look for.”

Collectors had long collected what are called Micro O varieties of various dates: 1880-O, 1899-O, 1896-O, 1900-O, and 1902-O Morgan dollars, so named because the Mint mark of the New Orleans Mint was smaller than typically found on Morgan dollars.

However, some in the collecting community had reservations about the legitimacy of some (though not all) of these pieces, because examples exhibited certain characteristics of counterfeit dies. Still, even with such suspicions, these Micro O dollars were listed in standard and specialist books as legitimate, and some grading services authenticated them as genuine.

Then, in August 2005, Professional Coin Grading Service announced it would no longer grade the 1896-O, 1900-O, and 1902-O Micro O dollars after they were determined to be “contemporary counterfeits,” pieces made when the United States Mint was striking real silver dollars.

In reaction to PCGS’s August 2005 announcement, Numismatic Guaranty Corp. officials stated that NGC had been aware of the nature of the Micro O varieties of 1896-O, 1900-O, and 1902-O Morgan dollars “for the better part of five years,” and that it had long refused to authenticate them as genuine.

Since the determination of the three dates as counterfeits, specialists have searched for related pieces. According to SSDC, the related Micro O counterfeits identified as fakes since 2005 include “a rare 1901-O Micro O, an 1896-O with a post-1900 ... reverse, and several other coins dated 1900-O and 1902-O.”

The many Micro O varieties of 1880-O and 1899-O Morgan dollars are genuine, according to specialists. Similarly, Baumgart notes, “There are 6 die marriages for 1900-O/CC that have been cataloged forever (VAMs 7-12), and they are unquestionably genuine.”

The six genuine varieties of 1900-O/CC Morgan dollars resulted from the repurposing of reverse dies originally intended to be used by the Carson City Mint in Nevada. When the Carson City Mint stopped striking silver dollars in July 1899, reverse dies held at the facility were returned to the Philadelphia Mint, where the CC Mint mark of each was partially effaced and an O Mint mark punched over the remnants of the original Mint mark.

The repunched dies were then sent to the New Orleans Mint and used to strike 1900-O/CC Morgan dollars.

Since at least 1928, the over Mint marks were known to exist, but collectors did not actively search them out until the 1950s.

The fake 1900-O/CC Morgan dollar and the Micro O dollar fakes appear to date to the early 20th century. Many are made of a higher fineness of silver than the genuine coins. The counterfeiters responsible for the various related coins appear to have been prolific, producing many die pairs — something today’s collectors appreciate.

According to Baumgart, 24 different die pairs have been identified “in this family of contemporary counterfeits.”

“It’s hard to believe they made so many die pairs! And we are still finding new ones,” according to one poster at VAMWorld.