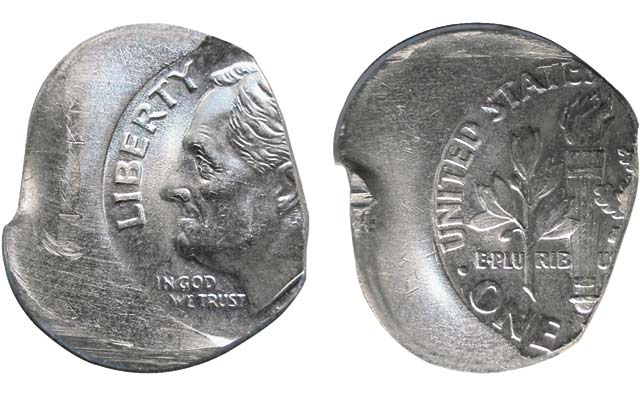 This dime was pinned and pinched between two machine parts during the strike. The two elements most likely represent an independent feeder and ejector. 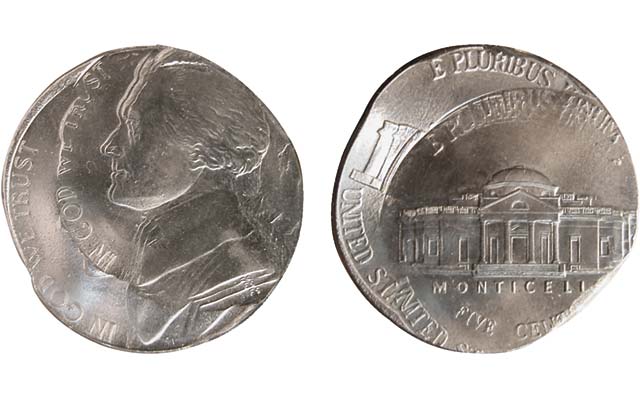 On rare occasions, what appears to be a badly damaged error coin turns out to be legitimate in all respects. Consider this deformed Roosevelt dime. At first glance, it looks like an off-center strike that was crumpled after it left the striking chamber. But actual post-strike damage is limited to some heavy abrasions on the obverse.

Since the left side is pushed in but the right isn’t, one might instead conclude that this is a case of pre-strike damage, with damage on the right erased by the strike.

The nearly straight right margin suggests several other common error types. We can quickly dismiss the idea of a straight clip because the coin’s weight (2.25 grams) falls within the normal range of variation for this denomination.

One might next surmise that this is a chain strike that is atypical in both its shape and its unusual length (13 millimeters). A chain strike forms when two planchets lie side-by-side in the striking chamber and their expanding edges meet. While most chain-struck edges are straight, other shapes do occur, including slightly convex ones that resemble the right side of this dime (see the April 12, 2010, column). Other similarities to a chain strike include the lack of metal flow in design elements bordering the right edge and the presence of a contact facet all along that edge.

We’ll shortly see that all of these guesses are incorrect. This dime was actually pinned and pinched between two machine parts during the strike.

The right side of this dime was struck against a concave machine part, most likely the cradle of a feeder. We can assign this error to the more general category “foreign object chain strike” so as not to preclude other possible culprits.

The unstruck left side of the off-center dime is pushed in, and an 11-millimeter-long contact facet runs along its edge. The line of contact is gently convex except at its lower end, where it swings out rather abruptly.

The left contact facet and the adjacent deformation is an example of “intra-strike damage.” Intra-strike damage occurs during the strike, but is unrelated to the impact of the dies or forces transmitted by any object lying between the dies. Intra-strike damage sometimes occurs when the struck portion of an off-center coin expands and pushes the unstruck portion into an obstruction lying on top of the collar. It can also occur when an off-center coin is temporarily fixed in position by the two dies. During this brief interval, a moving part can injure the portion of the coin protruding from the striking chamber (see the May 30, 2011, column). That’s evidently what happened to this dime. My guess is that the left-side damage was caused by an ejector that was physically or functionally separate from the feeder.

This scenario seems robust because many other cases of “bilateral machine part impingement” exist. The phenomenon is also very consistent, both in appearance and in the errors it’s associated with. While it’s seldom seen in simple off-center strikes, bilateral (and occasionally unilateral) machine part impingement is almost ubiquitous among recent double- and multi-struck coins, especially State quarter dollars. Produced by the high-speed Schuler press, these errors are struck with the now-standard inverted die setup (reverse die as hammer die).

Bilateral machine part impingement typically affects coins that receive a normal first strike and then two or more closely-spaced off-center strikes that are well-separated from the first strike. One can make a persuasive argument that the mistimed and malpositioned press components are directly responsible for these multi-strikes.

Shown here is a quadruple-struck Jefferson 5-cent coin with classic bilateral machine part impingement. The first strike was normal, while the next three strikes are closely-spaced and about 20 percent off-center. The right side of the coin features a long, gently convex edge with a contact facet whose face is flat and nearly vertical in cross-section. The pushed-in left side has a somewhat shorter contact facet whose lower end turns outward.

A larger sample of such errors will show variability in the shape, severity, and cross-sectional profile of both contact points. The line of contact at the edge of the off-center strikes varies from nearly straight to almost as convex as a normal coin. This variation undoubtedly reflects differing degrees of distortion in the appressed, chain-struck elements. The contact facet at the opposite pole varies in its length and the degree to which it deforms the portion of the coin opposite the off-center strikes.