Silver tetradrachm from Syracuse an affordable piece of art 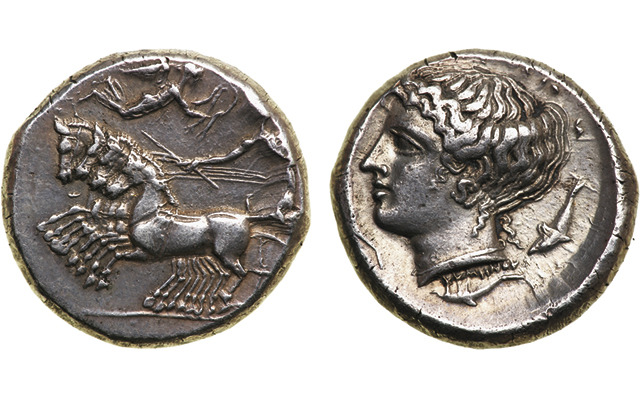 A silver tetradrachm of Syracuse in Sicily, issued circa 415 to 405 B.C., reflects Syracuse’s prosperity and military dominance in the fifth century B.C.

A circa 415 to 405 B.C. silver tetradrachm of Syracuse, in Sicily, reflects the prosperity and militarism of Sicily in the fifth century B.C.

The piece sold for $3,776, including the 18 percent buyer’s fee, in Ira & Larry Goldberg Coins & Collectibles’ Sept. 2 auction of world coins.

Syracuse was the most prosperous and powerful city in the west, and needed coins to pay the mercenaries required to expand and protect its claims.

The rulers also waged a public relations campaign, according to the auction house.

“Just as the varied courts in Renaissance Italy supported artists and craftsmen in an effort to adorn their cities and outdo their rivals, the tyrants in fifth century Sicily did the same,” according to the catalog.

This led to a “flowering of artistic expression in the city’s coinage,” which is widely recognized both inside and outside of numismatic circles, as artists like Euainetos and others were hired to create coin dies, “breaking from the static molds of the Archaic period,” according to the catalog.

On this coin, the obverse (showing Nike flying above a charioteer) is unsigned, but experts believe it was created by Eukleidas. The reverse is signed by Eumenos (below the neck of Arethusa).