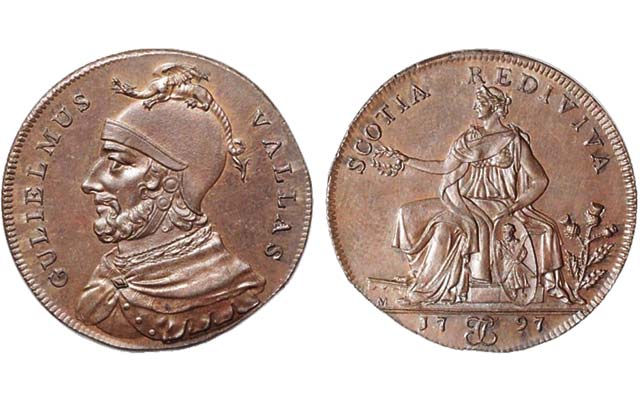 William Wallace is featured on a circa 1797 commemorative halfpenny token of Ayrshire, an example of which just sold for $200.

Thanks to the 1995 Mel Gibson movie Braveheart, the hero of Scotland’s early independence movement, William Wallace, is well known today.

Wallace was also featured on a circa 1797 commemorative halfpenny token of Ayrshire, an example of which just sold for $200 in Davissons Ltd.’s auction No. 34, which closed Jan. 21.

The token, which is in Uncirculated condition, features Wallace on the obverse and an allegorical female figure (representing Scotland) on the reverse. Historians, including the Society of William Wallace, believe Wallace was born in Renfrewshire, although his birthplace is contested and for a long time was believed to be Ayrshire.

Wallace helped defeat an English army at the Battle of Stirling Bridge in September 1297, and served as Guardian of Scotland (in the name of King John Balliol) until July 1298 when defeated at the Battle of Falkirk. In August 1305, Wallace was captured and handed over to King Edward I of England, who had him hanged, drawn, and quartered for high treason.

Allan Davisson, of the auction house, likened the series of tokens to the modern U.S. commemorative half dollars, acknowledging that these tokens were directed at collectors.

“The [commemorative half dollars are] legal tender but nobody spends this modern stuff, it’s intended for people to keep,” he said. “These tokens are as official as a Mount Rushmore 50-cent piece is legal tender American dollars.”

The 10.68-gram weight of the token matches the standard halfpenny, he said.

To learn more about the firm, visit its website.