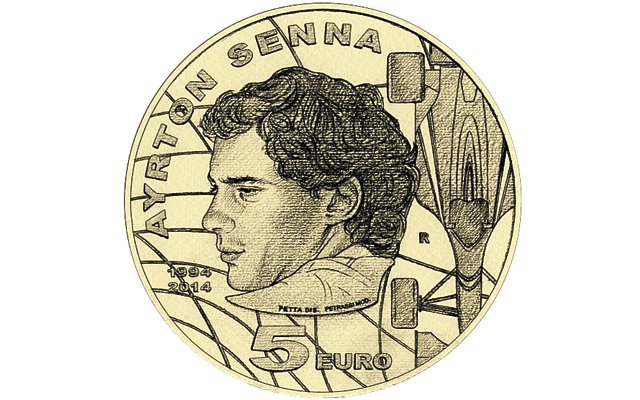 The coin is being issued by the Azienda Autonoma di Stato Filatelica e Numismatica, the state’s agency of philatelics and numismatics.

Senna died during the seventh lap of the Grand Prix of San Marino on May 1 when the steering column of his Williams FW16 race car gave way and he hit Tamburello curve at 140 miles per hour.

The Brazilian-born three-time world champion was 34 years old. Ironically, Senna had begun discussing improving safety among Formula 1 racing that morning, a day after a friend died on the same track.

His image and his car appear on the obverse of the coin, with the anniversary dates of 1994/2014, the inscription AYRTON SENNA, the denomination 5 EURO and the R symbol of the Italian Mint.

The reverse shows the coat-of-arms of San Marino.

The coin weighs 18 grams, measures 32 millimeters in diameter and has a mintage limit of 8,000 pieces.

No price has been announced for the coin as of July 9.