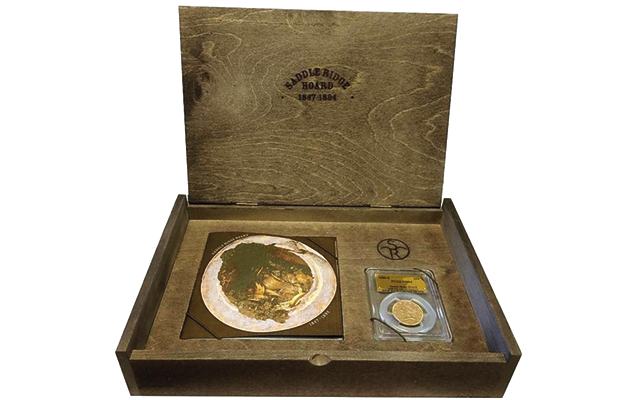 In less than 15 hours, nearly half of the 1,427 coins comprising the Saddle Ridge Hoard of United States gold coins were reported sold.

The coins went on sale at midnight Eastern Time May 27 on Amazon.com online and through Kagin's, the Tiburon, Calif., numismatic firm contracted to market the coins.

Kagin's is marketing the coins on behalf of the couple that discovered the coins in February 2013 packed in eight metal cans that were buried on their northern California property. The couple has retained an undisclosed number of the hoard coins for themselves, David McCarthy of Kagin's said.

McCarthy, senior numismatist and researcher for Kagin's, said at mid-day May 28 that the firm was still trying to reconcile the total dollar value of sales through both purchase venues. Both venues were offering different coins from the hoard.

McCarthy said earlier in the morning May 28 that during the first three hours of sales, Amazon and Kagin's combined had sold nearly 300 coins at retail prices in excess of $2.5 million.

Initial sales were concentrated primarily on the better quality coins priced above $5,000 and targeted toward the numismatic community. McCarthy said. Once word spread to the public about the availability of the coins, sales encompassed coins in all price ranges, he said.

Each coin being offered is encapsulated by Professional Coin Grading Service with a certification label tying provenance to the hoard. The encapsulated coins are then secured inside a lightly stained wooden box branded with a Saddle Ridge logo designed specifically for marketing the coins. Also included in each box is a color-illustrated catalog detailing the hoard find.