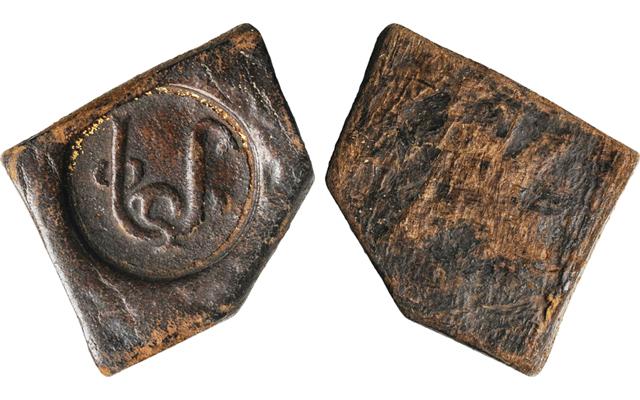 A piece of leather money from Russia, graded Choice Very Fine by Stack's Bowers Galleries, is being offered at auction during the American Numismatic Association World's Fair of Money in Rosemont, Ill.

One Aug. 7 Heritage hosts its U.S. coins Platinum Night sale, and on Aug. 8 Heritage has a third Platinum Night auction, featuring ancient and world coins. Beyond these big auctions, many more auction sessions will be spread out during the convention.

Hard times make some people stretch a dollar in the figurative sense, but at one time in Russia, money really could be stretched.

The practice of using leather as a currency dates back at least to the 14th century, and an undated 1-ruble piece of leather money from somewhere in the 14th to 16th centuries is part of the Demarete Collection being offered by Stack’s Bowers.

The commercial trade of furs and leather, where each article had a fixed value, was affected by inflation, and soon animal hides were being traded in portions, according to the auction firm, eventually resulting in small squares of embossed leather that circulated as currency.

The example offered by Stack’s Bowers is graded Choice Very Fine, according to the firm, and has “minor cracking” of its dark glossy brown surface.