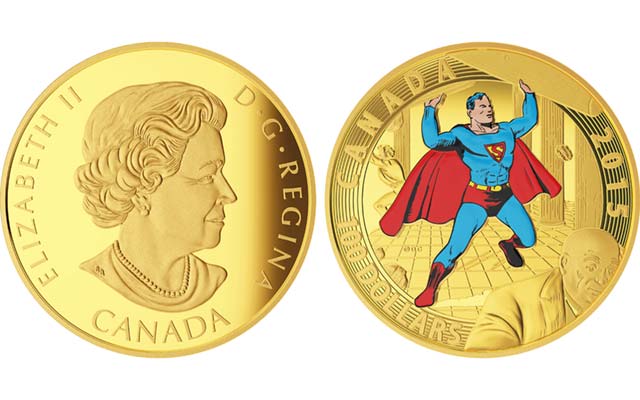 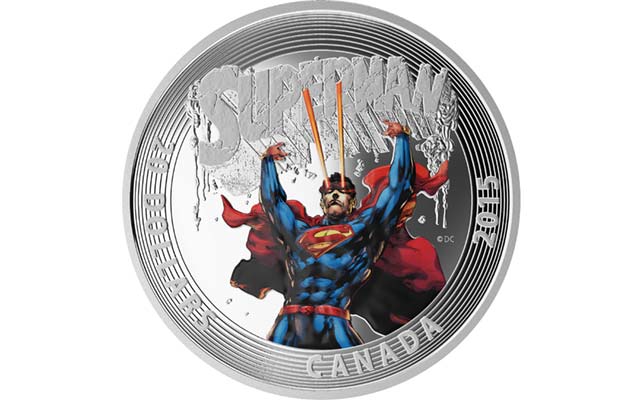 Superman wields his heat vision and uses his super strength to lift an object, in this case the comic book title, on a Proof 2015 silver $20 coin from Canada.

Comic book characters and coins continue to go together at the Royal Canadian Mint.

The RCM on June 2 released four 2015 Superman coins, following the release of various Superman-themed coins in 2013 and 2014.

The gold coin has a mintage limit of 2,000 pieces, the same as the 2013 gold $75 coin and 2014 gold $100 coin, which both sold out promptly and shot up in the aftermarket. All three of these gold coins weigh 12 grams and measure 27 millimeters in diameter.

One of the 2015 silver trio honors Superman Action Comics No. 1 (2011), depicting Superman as he runs from the authorities through the streets of Metropolis.

Another coin’s reverse design is taken from one of the six variant covers of Superman Unchained No. 2 (2013). On the coin, Superman battles corrupt covert military forces, lifting a tank over his head with just one arm.

The third silver coin design is borrowed from Superman No. 28 (2014), which depicts Superman in his Kryptonian battle armor, wielding his heat vision and using his super strength to lift an object, in this case the title of the comic book.

All of the coins carry the Susanna Blunt effigy of Queen Elizabeth II on the obverse.

For full details of the program, visit the RCM website.