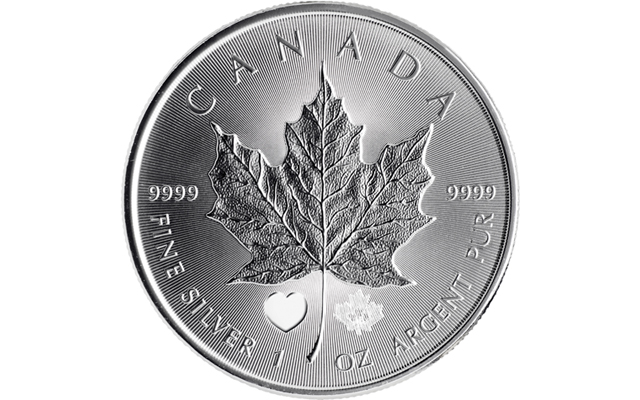 A 2015 Maple Leaf silver coin has been issued with a heart privy mark to raise funds for two charities that serve soldiers and their families.

Officials of Rosland Capital and the Royal Canadian Mint announced Oct. 13 a limited edition coin to benefit the American organization Fisher House Foundation, and Canada’s Valour Place. Both agencies provide free accommodation for American and Canadian military and veterans’ families while their loved ones are receiving hospital treatment.

The 2015 .9999 fine silver 1-ounce coin features a heart-shaped privy mark, representing the heart at the center of the Fisher House logo. Sales of the coin will benefit each charity. Rosland officials said the firm would donate $1 — 50 cents per organization — for each coin sold. In addition, Rosland Capital will make an additional donation of $25,000 to the Fisher House Foundation, according to the firm.

A representative of Rosland would not announce the mintage limit and cost for the coin.

The coin carries the Susanna Blunt effigy of Queen Elizabeth II on the obverse.

The heart privy mark appears on the reverse, to the left of the leaf’s stem.

The coin exhibits the radial line finish that debuted with the 2014 silver Maple Leaf.

“We’re proud to have so many veterans among the Rosland family [of customers] so we’re delighted to be able to support an organization that does so much to help military and veterans’ families,” said Marin Aleksov, chief executive officer of Rosland Capital, in a press release.

Privy marks have been a popular element to the silver Maple Leaf bullion program. Various marks in the past have noted Chinese Zodiac calendar phases, the Titanic sinking, and World War II, among other items.