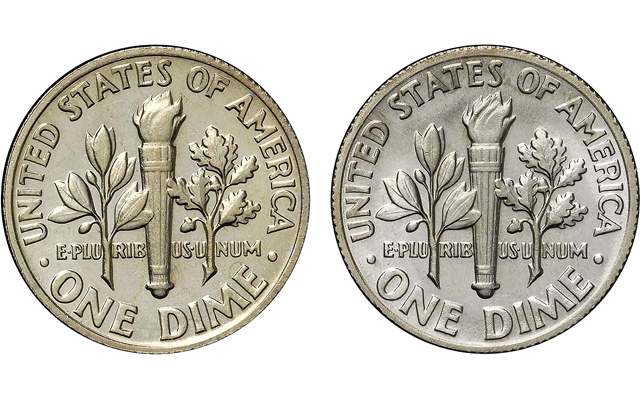 The 1969 dime has two reverse subtypes. Reverse of 1946, left, has a torch flame with delicate topography. The Reverse of 1968, right, has deep lines cutting through the flame.

The 1969 issue is considered by many to be a key in the copper-nickel clad Roosevelt dime series, 1965 to date. Its mintage of nearly 146 million pieces is the fourth lowest of all circulation-strike issues.

Although this figure sounds high, in truth, original Brilliant Uncirculated rolls of 1969 Roosevelt dimes are surprisingly hard to find and the issue was not well made. As a result, certified populations are very low. Combined, Numismatic Guaranty Corp. and Professional Coin Grading Service have certified only 248 examples of the 1969 dime in all grades, squarely among the lowest of the era.

Specialists want Roosevelt dimes that are well struck. Specifically, examples showing fully split bands at the top and bottom of the torch on the reverse are most prized. In grading, this attribute is designated as full torch (FT) by NGC and full bands (FB) by PCGS.

For 1969 dimes, coins with full torch are nearly impossible to find. Just 19 have been certified by NGC and PCGS — in all grades combined. One price guide lists this coin’s value in Mint State 66 full torch at $1,050, making it among the most valuable of copper-nickel clad Roosevelt dimes.

By the late 1960s, the hub used to make dies for Roosevelt dimes had worn considerably. The dies it created had muted detail, which contributes to the scarcity of well-struck examples. To address this, a new hub was created with crisper detail in 1968. It was used to make dies for Proof coins beginning in mid-1968, and on all circulation-strike dimes from 1971 to 1980.

Called the “Reverse of 1968,” a modification to the flame is this reverse design’s most distinguishing characteristic. Since the introduction of the Roosevelt dime in 1946, the flame atop the torch had gentle folds. In the 1968 incarnation, lines throughout the reverse were strengthened and two sharp incisions were added to give the flame more definition.

Because details are more deeply incised in the new hub, coins with the Reverse of 1968 are more likely to be encountered with fully-split torch bands. Although they are less common overall, right now 1969 dimes with Reverse of 1968 comprise the majority of the full torch examples. This discovery is still very new, but affects a key date in the series.