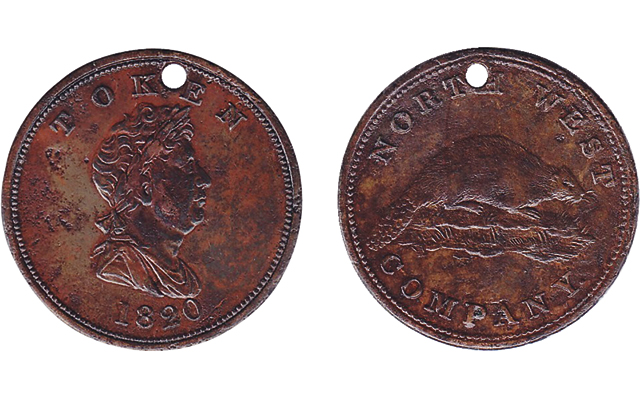 A rare early North American token from the North West Company highlights Geoffrey Bell Auctions’ May 29 and 30 auction in Toronto. The token has an estimate of $20,000 to $25,000.

A rare token from the history of North American exploration and commercialization highlights Geoffrey Bell Auctions’ May 29 and 30 sale in Toronto.

The North West Company token, a rarity in brass (most are found in copper), is probably the finest known example, and certainly the best example ever handled by the auction firm, according to Brian Bell, the firm’s president.

The North West Company was a competitor of the more famous Hudson Bay Company.

The North West Company was formed around 1779 in Montreal. Early leaders were the Frobisher brothers, Simon McTavish, Peter McGill, and 16 other investors and agents, holding 20 shares in all. The agents were the individuals who spent the fur trading season in fur country overseeing trade with the aboriginal peoples.

The Hudson and North West companies merged in 1821 but not before numerous minor skirmishes, culminating in the Battle of Seven Oaks, between traders for the two companies.

The tokens were made in Birmingham, England, by John Walker & Co., for use promoting the fur-trapping enterprise in the Pacific Northwest. Tokens were reportedly good for one beaver pelt (which explains the beaver shown on the reverse).

Britain’s King George IV appears on the obverse of the token in Bell’s auction, and the piece measures 29.2 millimeters in diameter (slightly smaller than a Kennedy half dollar).

In 2012 an example graded Choice Very Fine realized a hammer price of $18,000 in Stack’s Bowers Galleries’ John J. Ford Jr. Collection auction. The example in the Bell auction is “far superior” to the Ford token, according to the auction house, despite being holed (as is usual), having a Good Extremely Fine obverse and an About Uncirculated reverse, according to the sale catalog. Lacquered, the token exhibits minor obverse pitting and light corrosion between letters on the reverse.

Most of the surviving tokens of the North West Company have been unearthed in the lower Columbia River valley. The aboriginal tribes of that area had a practice of burying a deceased person’s belongings with the body. Many of the extant tokens found today are corroded as a result, having been underground for lengthy periods of time.

The token is the highlight of the George H. Thomson Collection, which is being offered during one day of the two-day auction. The sale is being conducted in conjunction with the Toronto Coin Expo, at the Toronto Reference Library.

Thomson began his foray into the tokens by buying a collection outright from collector and friend Murray Tolmie in 1975. After adding to the collection for nearly four decades, Thomson decided to sell.

He writes in the catalog, “Most collectors leave their hoard to be dispatched after they have gone. I thought I would enjoy seeing my collection launched into a new life in the hands of others. ... a sad, yet happy parting.”

For more information about the show, visit the expo website at www.torontocoinexpo.ca.