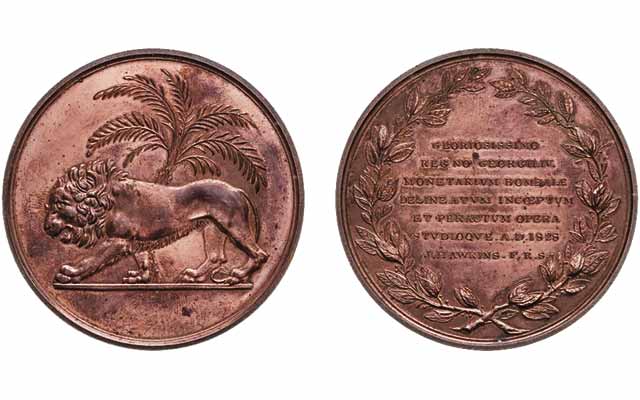 A rare medal was issued to mark the 1828 opening of the Bombay Mint in India, with only this example known in bronze. About a dozen are known in silver.

When India’s Bombay Mint opened in 1828, a medal was issued to celebrate.

A rare bronze example of the medal — which may be a trial striking — recently sold in Morton & Eden’s July 2 auction.

The medal features a lion and palm tree design on the obverse, with an inscription within laurel wreath on the reverse.

Robert Puddester, in Medals of British India With Rarity and Valuations, only records a silver version, with fewer than one dozen of those examples known, and none in bronze.

The medal measures 63.5 millimeters in diameter and is “Virtually as struck” with “a few minor marks.”

Interested in medals? Check out these Coin World stories!