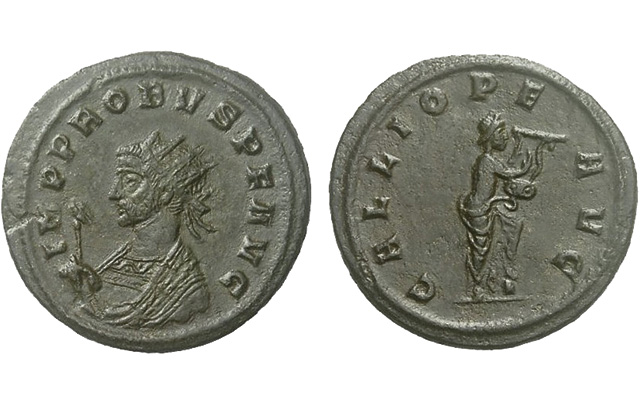 One of five known examples of a rare coin of Probus highlights Numismatik Lanz’s Dec. 8 auction.

The fifth known example of a rare coin of Roman emperor Probus is offered in Numismatik Lanz’s Dec. 8 auction.

The sale, the firm’s 159th, includes other more valuable rarities, but the circa 277 to 278 A.D. antonianus of Probus has a special history. The design type was reported in the 19th century but no examples were known until at least World War II, according to the firm.

The coin shows a half-length portrait of Probus, crowned, on the obverse, and the muse Calliope, playing a lyre, on the reverse.

The coin may have been issued to celebrate Probus’ assumption of the consulship following the installation of the new imperial court at Siscia. After the reigning Aurelian was murdered, Probus was proclaimed emperor by his troops. On his way to Rome, he defeated Goths and Germans, strengthening his northern boundary. Siscia would have been a central base for these operations. Calliope would have presided over the panegyric (speech of praise) that accompanied the installation, and these coins could have been distributed to those in attendance, explaining the rarity today.

Two examples are in institutional collections, the Museo Nazionale to Rome and the University of Belgrade, with a third sold by Numismatik Lanz in 2000 and a fourth sold by Classical Numismatic Group in 2006. The CNG example, reported as Extremely Fine by CNG, realized $4,600, including the 15 percent buyer’s fee.

For more information about the sale, visit the firm’s website.