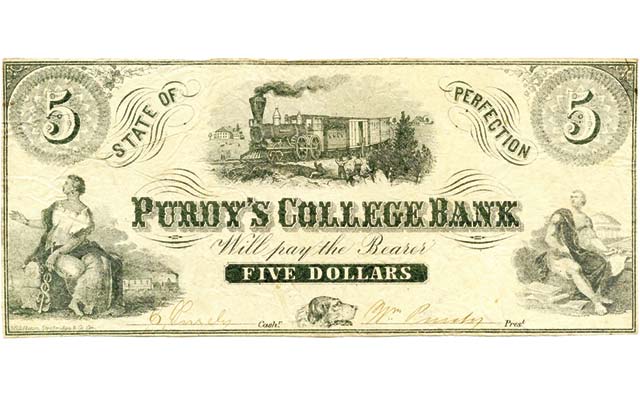 A $5 note signed by both J. (Judson) and William Purdy. The note was issued by Purdy’s College, a business school whose location remains a matter of conjecture.

Business colleges were institutions whose purpose was to give their students a good grounding in the various skills needed in the business world, such as bookkeeping, accounting, handling deposits, and a myriad of other day-to-day business skills.

A lot of the teaching techniques employed revolved around learning by doing. As a result, many business colleges had “practice paper money” printed that was used in the classroom when students were learning about tasks that involved handling money. These notes looked like paper money but usually included statements that they were for use only in the classroom.

One such institution was Purdy’s College. The common wisdom is that the school was located in Purdy, Tenn. As College Currency Money for Business Training, the standard reference on college currency, says: “Starting out as Purdy’s College in 1840, the school name was changed to Purdy University in 1859. The Battle of Shiloh during the Civil War almost totally destroyed the school. The Methodist Church reinvigorated it shortly after the war ended and maintained control until 1893. The town of Purdy is no more.”

And that’s been considered the final word for at least the last 20 years.

Recent research, however, puts the common wisdom into serious question. In doing census record searches for a $1,000 note, I came across a startling discovery when I was trying to run down “Wm. Purdy” whose signature appears on many notes. Jack Vorhies, a noted Indiana collector, had always insisted that Purdy was actually doing business in Indianapolis.

By 1867, the school had changed street locations and was now called Purdy’s Actual Business College. The final entry appears in the 1871 R.L. Polk & Co. Indianapolis City Directory, which lists William Purdy as the proprietor of Purdy’s Business College and, apparently a relative, Judson Purdy as a teacher at the same institution. It just so happens that “J. Purdy” is also a signature seen on some notes.

While none of the notes indicate the city or state of origin, I’ll put my money on Indianapolis. How about you?