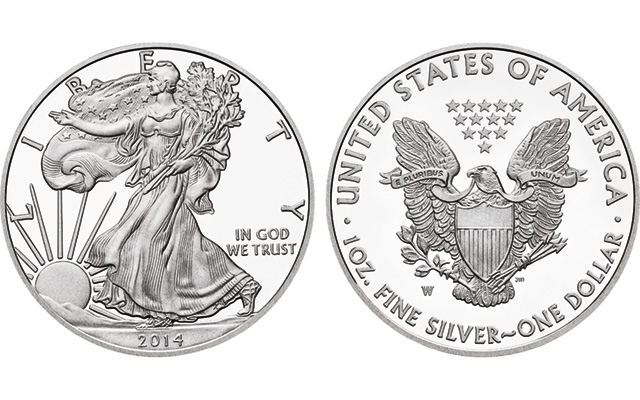 The bureau recorded sales through July 20 of 617,728 of the Proof American Eagle silver dollars as a single coin option, with another 5,550 coins in sales of the 2014 Congratulations set.

The Proof 2013-W American Eagle silver dollar is no longer being offered for sale by the Mint as a single-coin options. It originally went on sale from the Mint on Jan. 24, 2013, for $62.95.

The final mintage for the coin will be the total of sales of Proof American Eagles silver dollars in all of the product options for the year.

Examples of the single Proof 2013-W and 2014-W American Eagle silver dollars have sold on eBay in the $56 to $60 range in their original U.S. Mint packaging.

Certified examples of either year’s coins have sold on eBay in the $90 and up range for examples graded and encapsulated Proof 70, Ultra Cameo, First Releases, by Numismatic Guaranty Corp., or certified Proof 70, Deep Cameo, First Strikes, by Professional Coin Grading Service.

Similar pricing has been found for coins in original Mint packaging and for examples certified Proof 70 offered at retail.