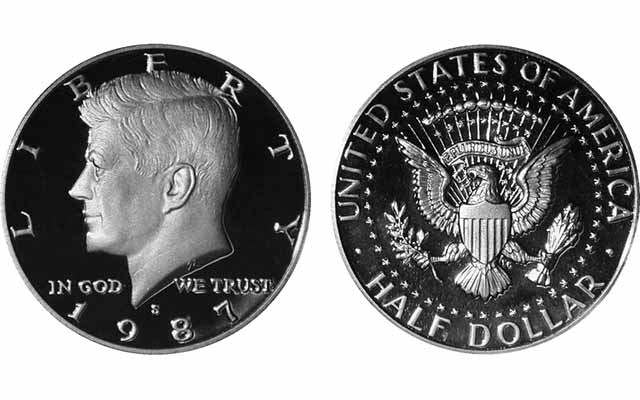 It may surprise you to learn that I find Proof coins in Kennedy half dollar rolls on a fairly regular basis.

I have yet to find any dated after 2012, but I suspect that given enough time, later dates will eventually turn up as I continue searching rolls.

Keep in mind that the word “Proof” is used to describe coins that are struck using specially prepared dies and planchets. The word “Proof” refers to a method of manufacture and does not denote the condition of the coin based upon wear.

So, what does that mean?

Proof coins are graded similarly to the ways that we grade other coins. Without going into all the details, you may see normal Proof coins designated in ranges from Proof 60 through Proof 70, with Proof 70 being the grade assigned to a perfect Proof coin. An impaired Proof can be assigned a lesser grade, like Proof 50 or 58.

Most Proof coins that I find would fall into the lesser grade range as described. They are circulated Proofs, and as such, they have some dings and scratches.

This 1987-S Kennedy half dollar is the exception to the rule. The obverse exhibits a fantastic deep cameo effect with almost no visible blemishes. A few minor white spots are visible here or there, but they are almost unnoticeable.

The reverse has a somewhat hazy appearance in the area of the denomination HALF DOLLAR, but overall, the coin is a beauty.

A reported mintage of 4,227,728 makes this a common Proof coin, but the Deep Cameo effect causes this particular piece to become a little more desirable to collectors than the typical example.

It’s still not worth a fortune, and you can probably purchase a similar one for about $5, but it was still a lot of fun to find this one.