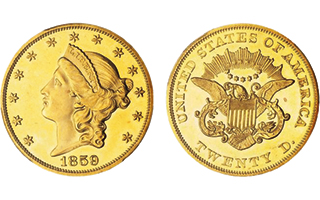 One of approximately 10 known Proof 1859 Coronet gold double eagles will be offered June 2 in Los Angeles as part of the Kernochan Family Collection of United States Gold Coins.

Graded Proof 62+ by Professional Coin Grading Service, the coin is one of 24 coins that comprise the Kernochan Family Collection.

Also to be offered in the Bonhams sale is the second part of the Champagne Lanson Bonnet Vineyard Collection of U.S. Gold Coins.

The well-publicized discovery of the Champagne Lanson Bonnet Vineyard coins occurred in France in February 2012 when, according to the vineyard, several of the coins rained down on a worker remodeling a former grape-drying facility.

All the 24 gold coins in the Kernochan Family Collection have been in the possession of the Kernochan family and were uncovered in the bank vault of John Marshall Kernochan (1919 to 2007), an early 20th century patriarch of the family.

According to Bonhams, the Kernochans were an Irish immigrant family who first worked as colliers and teamsters, then made a fortune in dry goods in the 19th century.

“Joseph Kernochan’s (John Marshall Kernochan’s paternal great-grandfather) sons and daughters married into New York’s aristocracy and rose to become members of Mrs. William B. Astor’s ‘Four Hundred,’?” according to Bonhams. “According to legend, this was the number of society’s elite who could fit into her opulent ballroom.”

The PCGS Proof 62+ 1859 Coronet double eagle in the Kernochan Family Collection is one of fewer than 10 examples extant from a reported mintage at the Philadelphia Mint of 80 coins. (An April 7 Bonhams press release suggested a lower survivor population.)

According to Jeff Garrett and Ron Guth in the Encyclopedia of U.S. Gold Coins 1795-1933, two examples are in the National Numismatic Collection in the Smithsonian Institution’s Museum of American History; one is in the holdings of the American Numismatic Society; and two are reportedly in complete sets assembled containing Proof 1859 coins.

Other examples are known in private hands, including the example offered by Bonhams.

Bowers and Ruddy Galleries Inc. sold an example in its Oct. 27 to 29, 1982, sale of The United States Gold Coin Collection, representing the holdings of Baltimore collector Louis E. Eliasberg Sr. The 1982 auction lot description identified the condition of the coin as “Choice Brilliant Proof-65.”

In the 1982 auction lot description, numismatist and gold specialist David Akers is cited suggesting seven or eight extant Proof 1859 double eagles. The 1982 lot description indicates the total extant coins included two owned by the Royal Mint in London, one in the National Numismatic Collection and one at the ANS.

The 1982 auction lot description further states: “The finer of either the Bell Collection coin (Stack’s, 1944) or the Ten Eyck-Clapp coin. The previous owner of the present collection owned both specimens at one time, sold one, and kept this as the better of the two. Believed to be the Clapp coin.”

Tom Hockenhull, curator of Modern Money at the British Museum, said April 9 the museum has no Proof 1859 double eagles in the collection.

In 1859, Baltimore professor John Alexander, a proponent of a uniform international coinage, donated to the British Museum a double set of 24 Proof 1859 United States coins, sans the double eagle denomination.

At the time of his death in 1867, Alexander was designated to become the director of the Philadelphia Mint.

Other highlighted gold coins in the Kernochan Family Collection include a 1795 Capped Bust, Small Eagle gold $5 eagle and an 1807 Capped Bust, Heraldic Eagle half eagle. Both half eagles are graded PCGS About Uncirculated 58.

Also headlining the June 2 auction at Bonhams is the second part of The Champagne Lanson Bonnet Vineyard Collection of U.S. Gold Coins.

The coins reportedly were untouched for nearly a century and ranged in condition from “Very Fine to Choice Mint State.”

Paul Song, director of the Rare Coins and Banknotes Department at Bonhams, says of the auction, “Bonhams is extremely pleased to be working with the Lanson-BCC Group for a second time. We are excited to offer the second part of this newly-discovered and unique treasure to auction, which will not only promote the presence of the Lanson Group champagnes within the U.S., but with its success, half of the proceeds from the auction will go to the individual who discovered the coins.”

Details of the sale can be found at www.bonhams.com/uscoins. The illustrated catalog will be available online for review and purchase in the weeks preceding the sale.