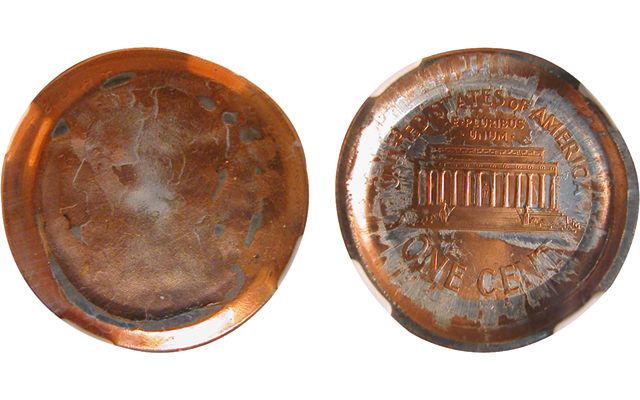 Despite severe post-minting abrasions on its obverse face and downturned edge, this brockaged broadstruck Lincoln cent was given a lofty grade of MS-66 by a leading grading service. The grader mistook the abrasions for split copper plating. 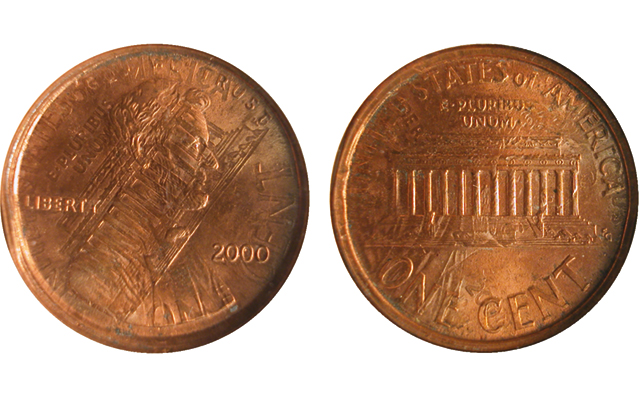 This flipover, double-struck 2000 Lincoln cent was given an unexpectedly low grade of MS-60 simply because it was struck through “grease” and has embedded die fill on both faces. Extensive preservation of first strike details is partly due to the development of a surface film afterimage (another grease effect).
Previous
Next

Professional grading services first appeared in the early 1980s. Since then, many collectors have been lulled into a sense of complacency, figuring that any grade assigned by a top-tier grading service is likely to be accurate within one or two points of an industry-wide consensus. Such confidence may be misplaced, at least when it comes to error coins.

I frequently come across coins that have been grossly over-graded or under-graded by the leading grading services. Many have been featured in previous columns, although any grading critique was often incidental to the discussion of the error itself. (See the Aug.15, 2011, and Oct. 14, 2013, columns for some examples of over-grading.)

In many cases, post-strike damage is mistaken for the effects of the strike. This accounts for the lofty grade of Mint State 66 bestowed upon a greatly expanded, broadstruck Lincoln cent that has on its obverse face a full, centered, flipover, first-strike brockage. As is true of many planchets struck against another coin or planchet, the coin is cupped (in this case toward the anvil die). This led the service to mistakenly diagnose the error as a “reverse die cap” even though there is no evidence to suggest that more than one strike was involved.

The obverse face shows severe abrasions that are commonly referred to as “wheel burns.” The name reflects the belief that these black patches are produced by a rubber wheel that propels coins through sorting and counting machines. The zinc core is exposed in these dark areas. Almost a dozen separate wheel burns are arranged in a rough circle that coincides with the highest elevations on this saucer-shaped disc. Several small wheel burns are located inside the circle.

On the reverse face, the downturned edge of the coin has been almost completed abraded away, exposing bright zinc.

I contacted the grader (a well-known figure), who proceeded to defend his decision, arguing that all of the exposed zinc present on both faces represented areas where the copper plating had split under tensile stresses. While the coin exhibits plenty of naturally exposed zinc (especially on the reverse), the numerous abrasions can easily be distinguished from them.

When copper plating splits during the strike, the design continues uninterrupted across the exposed zinc. Here the design has been erased in the dark areas. In split copper plating, the same texture that characterizes the intact surface also characterizes the exposed zinc. But here the scraped surface is quite smooth and flat, with fine striations visible under a microscope.

I’d like to say this misdiagnosis is a one-off event, but it’s actually quite common. These sorts of abrasions are routinely ignored or misinterpreted in cupped Lincoln cents.

Under-grading is a problem that is mainly associated with weak strikes and struck-through errors (primarily “grease strikes”). “Grease” (compacted die fill) can leave a coin with rough patches that can look like damage to the untutored eye. Struck-in grime can resemble dirt that was acquired after the coin left the press. These misperceptions probably account for the surprisingly low, MS-60 grade assigned to a 2000 Lincoln cent with an in-collar, flipover double strike. Apart from a small edge ding at 8:30 (obverse clock position), the coin is unblemished.

It looks somewhat unattractive because the coin was struck through grease on both strikes and on both faces, leaving a number of roughened areas behind. Microscopic bits of embedded die fill can also be found on both faces.

Since most errors can be considered unattractive to the collector of conventional coins, it would be odd indeed if this particular brand of ugliness would have factored into the coin’s grade. It’s more likely that the grader thought that its unattractive appearance was acquired after the coin left the press.

Very weak strikes (so-called “die adjustment strikes”) are frequently given low grades simply because they preserve many of the tumbling marks present on the original unstruck planchet. Tumbling marks are picked up by the blank or planchet in the annealing drum, the chemical rinse bath, and during innumerable other steps during which planchets are jostled together. A weak strike won’t be able to smooth out all of these dings, leading to confusion with contact marks and other types of post-strike impact damage.

In contrast, post-strike impact damage will be as abundant in the field as elsewhere.

The take-home message is that any grade found on a “slab” label should be treated with skepticism until it can be corroborated with a first-hand examination or through quality photographs.