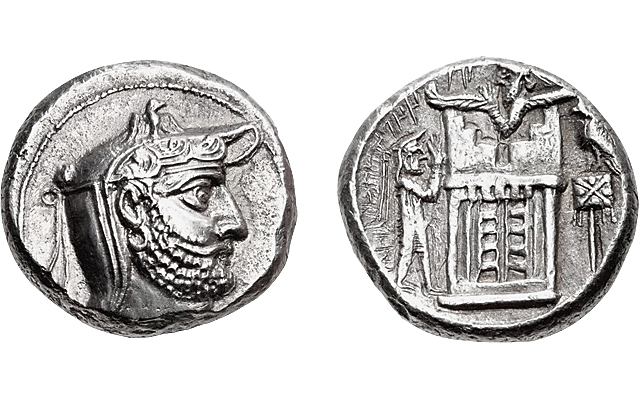 A previously unpublished coin, only the second known, confirms suggestions in earlier research about the coins of a king in what is modern-day Iran. The coin realized a hammer price of $45,000 in Classical Numismatic Group’s sale No. 97.

The auction, which closed Sept. 17, featured buyer’s fees of 17.5 to 20 percent, depending on bidding method.

The coin is only the second example known. The tetradrachm was struck in Istakhr (Persepolis) and issued during the early to mid-second-century B.C. by Vadfradad (Autophradates) II, a king of Persis in modern Iran.

Scholars once believed that the coins of Vadfradad II and a successor (dubbed the Unknown King I) did not include inscriptions. Some poorly preserved, previously published examples seemed to have some remnants of inscriptions on earlier coins, but the research was not conclusive.

The tetradrachm in the auction is the “first example of its type for this ruler with an almost complete reverse legend,” according to lot description. Other letters following his name are believed to represent the ruler’s title as “governor of the gods,” according to CNG.

The coin is graded Extremely Fine by the auction house. The firm describes the coin as having been struck in high relief.