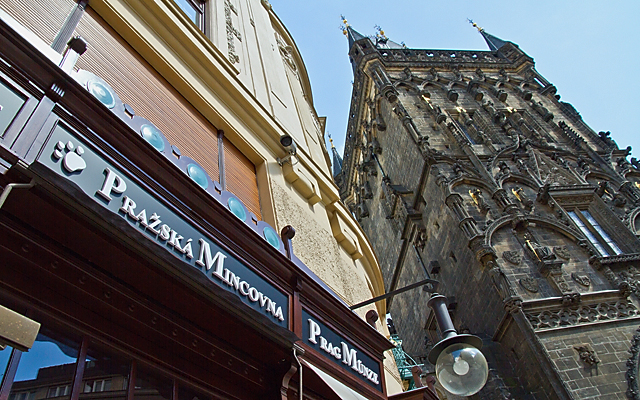 The Prague Mint is headquartered in the Municipal House in the cultural center of Prague. The site was once, appropriately, host to the Bohemian king’s court, and the king controlled the right of minting. Today the Prague Mint strikes its issues elsewhere, but the site is a link to Prague’s minting history.

Editor's note: The following is the first of a three-part Coin World series about the Prague Mint prepared by Jeff Starck for the September 2014 monthly edition of Coin World.

Read the second and third posts in the series:

While the Austrian Mint in Vienna lays claim, rightfully, to being the longest continually operating mint in the world, dating back to 1194, officials at the Prague Mint note that their city has a minting history going back even further.

However,  that history has been interrupted, according to the Prague Mint.

Minting has been an important enterprise in Prague for centuries, since the city was the seat of Bohemian dukes, and later, kings, who exercised their sovereign right to issue coinage with vigor.

The oldest Czech means of payment was the denar, production of which goes back to the second half of the eighth century.

From the 10th till the 13th century, several mints were located in what is now the Czech Republic and Slovakia, including a mint in Prague during the kingdom of Bohemia.

In 1300 the first Prague groschen was minted under Wenceslas II. These coins reflect the “top of the minting art of that time, especially for the level of the mintage,” according to the Prague Mint, but minting activities were soon transferred to the city of Kutna Hora, marking a break in production of coins in Prague until 1325.

Prague’s minting history is marked by many other interruptions and notable events, like the 1539 restoration of regular production of silver coins (an event commemorated on one of the Prague Mint’s medals, tying the historical to the here-and-now).

The most recent interruption occurred in 1856, after which the production of coins was concentrated in Vienna under the reign of the Habsburgs.

Prague was part of the nation of Czechoslovakia from 1918 until Jan. 1, 1993. From 1927, minting of local coins was completed at the Kremnica Mint, itself one of Europe’s old-guard mints, with a history dating back to 1328.

Finally, upon the dissolution of Czechoslovakia into the Czech Republic and Slovakia in 1993, a Czech Mint was formed to serve the Czech National Bank, the national mint’s main customer even today.

That national mint is located in the mountain resort town of Jablonec nad Nisou, a center of Czech medallic art and sculpture in recent decades thanks to the Secondary School and College of Art and Design located there. The town has a tradition of art and jewelry dating back to 1880, but the school has served as particularly fertile training ground for coin and medal artists since 1995 when specially designed programs were introduced.

This is one of the few medalist schools in Europe educating new generations of coin and medal artists, according to Pavel Trtik, chief executive officer of the Prague Mint.

Both the Czech Mint and the Prague Mint employ many graduates of the Secondary School of Art and Design.